The Iraqi election haven't just given us a winner. Sadr's evolution from a sectarian cleric feared by the US to the most influential leader is the personification of the change that Iraqis have been searching for.

After the US invasion of Iraq in 2003, a young Shia cleric Muqtada al Sadr became one of the strongest figures who started an uprising with an army against the American troops.

In the beginning, Sadr's Al Mahdi army was largely supported by Iran. When he later entered politics, he and then-prime minister Nouri al Maliki, who was also Iran-backed, shared much in common. But as Sadr was anti-American, when Maliki agreed to meet with then-US president George W Bush in 2006, the two started to drift apart ideologically. Eventually, Sadr and his nationalist Sadrist movement adopted anti-Iranian policies.

Remembered for his army's sectarian violence against the country’s Sunnis along with his anti-American stance, Sadr became the most influential leader in Iraq’s first post-Daesh parliamentary election.

Having secured more seats than all the other parties or alliances, the success of Sadr’s Al Sariun alliance gives him the ability to choose the next prime minister. Since he didn't run in the election himself, he can only choose the next premier and lead the country from behind the scenes. But securing the most number of seats doesn't mean he will be the country's next leader.

“In Iraq, elections don't tell you who is the winner and who is the loser. It's important not to overstate what he has achieved so far," Harith al Qarawee, a senior fellow at Atlantic Council told TRT World.

Regardless of who the winner of 2018 election is, Sadr's evolution from a sectarian cleric challenging US troops to a reformist leader able to influence Iraq's future, is an indicator of what Iraqis are demanding.

“There is a mood and a desire to move beyond the sectarian politics, particularly after the destruction that happened because of ISIS (Daesh), and the sectarian mobilisation that took place before the rise of ISIS and its invasion of Mosul. So there's a feeling that this direction should be avoided,” Qarawee says.

"There is a growing sense of Iraqi nationalism to some extent, especially after the defeat of ISIS (Daesh)," Harith al Qarawee adds.

Both Sadr and Abadi stuck to the nationalist discourse, but Qarawee says Sadr alternatively "has been vocal against the revival of sectarian alliances and critical of foreign interventions."

"The growing disillusionment with the established parties in Iraq, caused mainly by identity politics, led Sadr [to] appear as a populist leader who invested in the growing discontent among the population."

"There is a desire to move beyond sectarian divisions to the post-sectarian politics that is centred on issues and governance and social and economic demands rather than identity politics."

Sadr fashioned himself as an Iraqi nationalist as he started to gain power after the US invasion of Iraq in 2003, and he stuck to his nationalist themes in the 2018 election.

"He (Sadr) tried to appear as a reformist leader who accomodate the pro-protest mode among Iraqi citizens who are demanding a government that is not controlled by an established party," Qarawee says.

He also said that people demanded a policy focused on issues of governance and social and economic demands.

In 2015, a massive protest against the government erupted. Sadr then positioned himself as an opponent of the established parties and the existing system of governance, especially the fight against corruption. The role that sectarianism played in Sadr’s politics changed over time.

By the 2018 elections, he had rebranded his party completely in line with his “Iraq First” policy. Giving up on a foreign policy based on sectarianism, he visited Saudi Arabia shortly before the election. While most of the other parties "depend a lot on patronage," as phrased by Qarawee, he allied with the communist party in a populist move, which attracted secular supporters as well. He named the alliance Al Sairun (March Onwards).

"This is important because it shows that engaging in politics has helped change a major player from a radical opponent of the democratic process into an active actor within it — albeit with a peculiar style and discourse," Qarawee says.

A mere 45 percent of the voters went to polls in 2018 parliamentary elections after a social media campaign that called on Iraqis to boycott the vote, due to the difficulty of changing the system. Some Iraqis doubted that the election would bring change in Iraq, a feeling compounded by the Ayatollah al Sistani's anti-election message.

"There were demands to adopt a different electoral system that allows new parties and independents to compete," Qarawee says.

The protest affected the voter turnout which was at its lowest level since the US invasion of Iraq in 2003. The number of seats that Sadr's coalition won in the May election was similar to the previous election in 2014, but the low turnout decreased Abadi and Maliki's share of the votes. This allowed Sadr's Al Sairun to get more seats in parliament, even though Abadi created a cross-sectarian alliance to get a bigger share of the Sunni vote.

"There was a feeling that the electoral process has been used to preserve the power of [established] parties," Qarawee says.

Especially in Sunni politics the electoral playing field is divided between different groups sometimes based on local or tribal relations; other times on a relationship with the government, he says.

Sadr wasn’t unhappy with the low voter turnout. He thanked those who stayed at home, saying that "at least you didn’t vote for the corrupt."

"Sadr has a more consolidated base than the other parties and a better grassroots organisation which helped mobilise his base during the voting."

Qarawee says "the established parties did not respond to these demands and eventually the low turnout helped Sadr gain more seats than expected."

But more importantly, he says, a 45 percent turnout indicates that disillusionment with the system is growing. 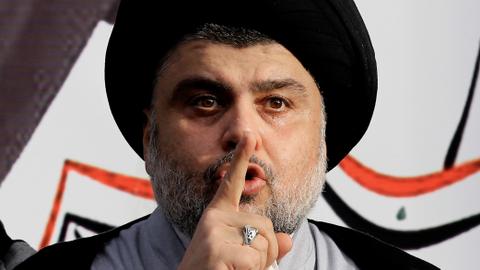