Film producer and businessman Mohammed Ali fled Egypt after accusing the country’s military rulers and President Sisi of corruption. A campaign he started is picking up steam on social media and now he wants people to get out on to the streets.

If Egyptian businessman Mohammed Ali has his way on Friday, hundreds of thousands will take to the streets to demand the resignation of President Abdel Fattah el Sisi.

It’s a tall order given Egypt’s brutal reputation for repressing protests, which includes the massacres of hundreds at Cairo’s Rabaa Square in 2013.

Dissent has since been a rarity, with all but the bravest daring to openly speak out against the Sisi regime, risking prison or exile. For Ali, it was the latter.

The construction contractor and film actor says he was short-changed to the tune of tens of millions by Egypt’s military for projects across the country. Further accusing the army and its commander-in-chief of pilfering billions from the state’s coffers on projects that were either economically unviable or unnecessarily extravagant. They included multiple palaces for Sisi in the suburbs of Cairo, as well as the Mediterranean city of Alexandria.

From his exile in Spain, Ali has gone on a one-man social media war against Sisi and the Egyptian regime. His videos complaining of corruption and oppression have gone viral on Twitter and other platforms, spawning hashtags that slammed the government.

One of these, which read ‘That’s enough Sisi’, passed a million mentions, spurring more hashtags, even more celebratory in nature.

#كفاية_بقي_ياسيسي
Next Friday We must take the real step pic.twitter.com/NhsnvhCZEY

Riding off the back of his successes, Ali is in no mood to leave the battle in the online realm.

His most recent hashtag reads ‘Wait for me Sisi’, with Ali warning: “You’ll see what the Egyptian people will do to you.”

There are signs that his campaign has an impact on the way the Egyptian people perceive Sisi.

“He used to derive his legitimacy and authority from his stoic military persona,” Cairo resident Amro Zein told TRT World, referring to the Egyptian dictator. “But these videos broke this aura of charisma entirely.”

Zein does not believe the crowds will come out to answer Ali’s call on Friday but believes the businessman’s campaign is not just a shot in the dark, suggesting Ali has support from figures within Egypt’s intelligence apparatus who are opposed to Sisi.

While the scale of support for Ali within the military is guesswork, the businessman’s campaign has definitely rattled Sisi.

The Egyptian president felt it necessary to address the accusations in a televised appearance over the weekend, although only in the vaguest of terms, avoiding specific charges.

Sisi said the palaces he built were the property of the state and not for his own enjoyment.

We are in The way to freedom kill your fears and say that’s enough#كفايه_بقي_ياسيسي#الرحيل_ياسيسي_او_النزول_للشارع pic.twitter.com/SuT1qeEJpW

“When you speak falsely, do you think that scares me?” Sisi said without addressing Ali directly, “I’ll keep building and building,” he insisted.

The strongman has also enlisted the help of actors and singers to compose songs in his praise and publish videos defending his integrity.

Many of the names that had signed up to defend Sisi were either not widely known or were former stars who had faded into obscurity.

Sisi came to power after orchestrating a coup against Egypt’s only freely elected leader, Mohamed Morsi.

Since taking power, he has moved to repress all opposition, both religious and secular.

Corruption is rife in Egypt and was one of the primary drivers of the 2011 uprising that brought down former president Hosni Mubarak. 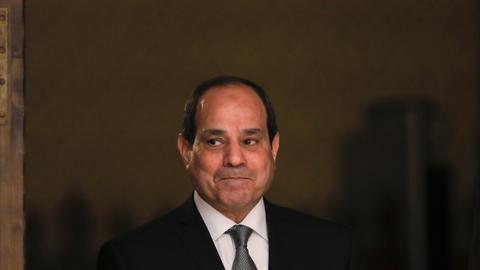