The protest was the most violent incident in Basra since mass anti-government demonstrations in October, when tens of thousands took to the streets in Baghdad and across the south to decry government corruption.

Protesters have torched parliament offices in Iraq's oil-rich south following days of inaction by the government after two activists were assassinated.

It was the most violent incident in Basra since mass anti-government demonstrations in October, when tens of thousands took to the streets in Baghdad and across the south to decry government corruption.

Protests also erupted in Basra in the summer of 2018.

Protesters had gathered to demand the resignation of Basra governor Asad al-Eidani after two activists were gunned down in the city in the past week.

Activist Reham Yacoub was killed in Basra on Wednesday by unidentified gunmen.

Yacoub was a respected activist who had been active in the October demonstrations.

Days earlier, activist Tahseen Osama was killed by armed men. That killing prompted dozens of protesters to take to the street, and police responded by firing live rounds at them.

But protesters said this was not enough, decrying inaction by the Iraqi government over the two killings. They carried banners calling for the activists' killers to be held accountable.

“Al-Eid ani bears the greatest responsibility" for the deaths of the activists, explained protester Ahmed Qassim, “because he is the head of the Supreme Security Committee and he is responsible for bringing any party involved in the assassinations to court.”

“Because he did not move a finger, he is complicit in the suppression of protesters by force,” Qassim said.

Al-Kadhimi is on a visit to Washington DC to conclude strategic talks expected to shape the future of US-Iraq relations, and the future of the US troop presence in the country. 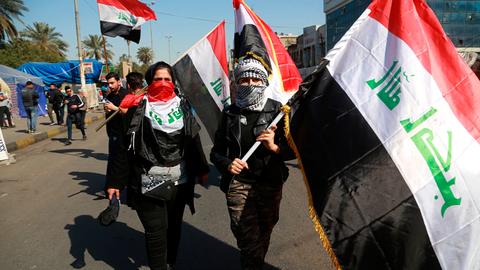 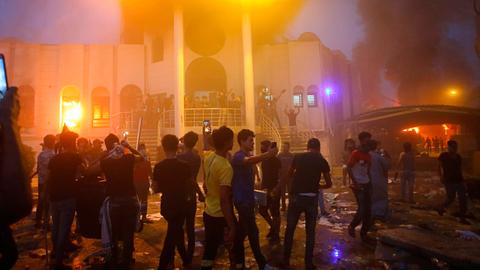