Donors in Brussels pledge $7B aid for Syria in 2019

Total falls short of what the UN says is needed. It says $3.3 billion is required to help meet Syria's own aid needs this year, plus a further $5.5 billion to support neighbouring countries where most Syrians are seeking refuge.

International donors pledged nearly $7 billion in aid for 2019 for civilians caught up in Syria's bloody civil war, the EU said on Thursday, but the total fell short of what the UN said is needed.

EU Humanitarian Commissioner Christos Stylianides announced the total at the end of a three-day conference in Brussels, on the eve of the eighth anniversary of the start of the conflict.

Senior representatives from scores of countries and international organisations were in Brussels in a fresh effort to drum up aid for Syria amid growing donor fatigue as the conflict enters its ninth year.

"Syria remains one of the great crises of our time," UN humanitarian chief Mark Lowcock said as the pledging conference opened in Brussels.

He expressed deep concern about the threat of open conflict in Syria's northern Idlib province, where more than 90 people were killed last month, nearly half of them children.

"A large-scale military assault on Idlib would create the worst humanitarian catastrophe the world has seen in the 21st Century," Lowcock said.

"Once a credible and balanced committee is formed, the path for constitutional reform and free and fair elections under UN supervision will be clear," said Turkey's Foreign Minister Mevlut Cavusoglu.

Conflict far from over

UN agencies, non-governmental organisations, and think tanks are warning that the conflict, which has killed more than 400,000 people and sparked a refugee exodus that destabilised Syria's neighbours and also hit Europe, is far from over.

Around 80 percent of people inside the country live in extreme poverty, and refugees are reluctant to return, fearing violence, conscription or prison.

At the #SyriaConf2019, @RefugeesChief @ASteiner and I call for sustained support to vulnerable Syrians, refugees and the communities hosting them https://t.co/KiGbh8s5dV#InvestInHumanity

The UN says $3.3 billion is needed to help meet Syria's own aid needs this year, plus a further $5.5 billion to support neighbouring countries where most Syrians are seeking refuge.

About 11.7 million Syrians still depend on aid and more than 6 million of them have been forced from their homes but remain in the country.

"If we get close to, or even a bit better than, the $6 billion that we raised last year for our appeals, then that will be a good day," Lowcock told the representatives of around 55 countries and 80 delegations expected to attend.

The European Union, the world's biggest aid donor, announced that it would provide $633 million (560 million euros) this year, while planning to offer the same amount next year and in 2021.

EU foreign policy chief Federica Mogherini also said that the 28-nation bloc would provide Turkey with 1.5 billion euros ($1.7 billion) more to help it manage Syria refugees, part of a deal it reached with Ankara to stop the refugees and migrants from leaving Turkey for Europe.

The EU has already given Turkey some 3 billion euros ($3.39 billion) to help manage Syrian refugees there.

Mogherini said the EU, which is hosting the conference along with the United Nations, hopes that the donor meeting will give impetus to stalled peace talks under UN auspices.

"We want the people of Syria not to be forgotten in a moment where the international community seems to care a little bit less about this," she said.

"We have to keep focused on a political solution for the conflict in Syria. It's not over yet. People need our support."

But beyond providing aid, the EU refuses to help rebuild the country until a political settlement has been reached.

"It's a message of 'you broke it, you own it,'" Jean-Christophe Belliard, deputy secretary general of the EU's External Action Service — essentially the bloc's foreign office — said ahead of the meeting, in reference to Syrian regime leader Bashar al Assad and his backers.

But some NGOs believe that stance over rebuilding can be a serious obstacle to genuine aid efforts.

"We're not here to build a brand-new water system for Syria. We're not here to build a whole new school network. We're here to make sure that children can be educated in a classroom that doesn't have rain blowing into it from broken windows, that people don't have dirty water flowing into their home," said Matthew Hemsley, Oxfam's Syria policy and communications adviser.

Absent from the donor conference are Syrians themselves. No regime or opposition representatives have been invited, but civil society group representatives in Brussels for the occasion are concerned that donor countries want to pressure Syrian refugees to return, despite the dangers and uncertainties they could face.

"We have to be very careful," warned Rouba Mhaissen, director of Sawa for Development and Aid.

"A lot of government delegations are here to sell return, especially from neighbouring countries." 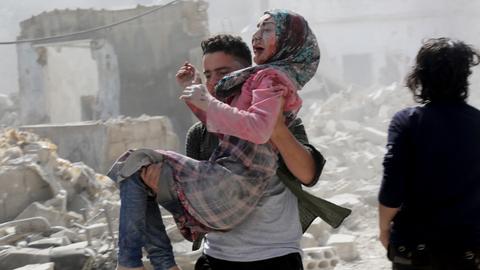