Attack was carried out by two drones but did not lead to casualties or damage, government says, warning "all options" are on the table in response to the raid.

Yemen's Houthi rebels have claimed an attack on a southern oil port, the first of its kind since a truce came to an end earlier this month.

Friday's attack was carried out by two drones but did not lead to casualties or damage, the Yemeni government said, warning that it was keeping "all options" on the table in response to the attack.

Houthis, who control the capital and most of northern Yemen, said in a statement they had carried out a "minor warning strike" on Friday on the government-controlled al Dhaba port in Hadramaut province.

The rebels have been demanding the government, backed by a Saudi-led military coalition, pay the salaries of employees and retired soldiers in the areas under rebel control.

The attack was launched "to prevent the continuation of the widespread looting of oil wealth and the failure to allocate it to serve the people... and pay the salaries of the employees," the statement said.

The incident is the first major escalation since the Iran-aligned Houthis and the Saudi-backed government failed to renew an UN-brokered truce earlier this month.

Hadramaut governor Mubarak Mabkhout said in a statement that two drones exploded in waters near a ship that was preparing to dock in the port in southern Yemen, about 550 kilometres south of the capital.

"No material or human damage was recorded," a government military official told the AFP news agency.

"All options are on the table to deal with the terrorist attack," the government said, while Information Minister Muammar Al-Iryani described the attack as a "dangerous escalation".

The conflict erupted in 2014 when the Houthis seized the capital Sanaa, prompting the Saudi-led coalition to intervene the following year to prop up the internationally recognised government.

Hundreds of thousands of people have died as a direct or indirect result of the conflict, according to the United Nations, which says the Arab region's poorest country is suffering the world's worst humanitarian crisis.

Efforts by the UN envoy to Yemen to revive the six-month truce ended in a stalemate early this month, as the Yemeni government and the Huthis failed to reach an agreement to extend it. 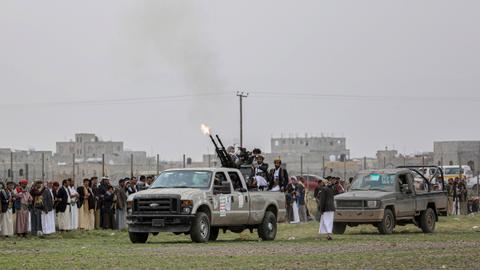