The country received 21 out of 27 UN condemnations for violating basic human rights of Palestinians.

In 2018, the United Nations issued 27 condemnations and 21 of them were against Israel.

Hillel Neuer, executive director of the United Nations Watch, tweeted the number of condemnations of the UN over the Israeli actions in 2018.

Syria, Russia, Iran, the US, Myanmar and North Korea were condemned one time by the UN in 2018.

Under the oppression policy against Palestinians, Israel carried out numerous operations that caused civilian killings in Palestine.

On the other hand, Israel is continuing invasion by the settlement policy for Jewish people in Palestinian neighbours.

Lastly Israel approved of plans to build nearly 2,200 housing units in the occupied West Bank on December 25 and 26 after Prime Minister Benjamin Netanyahu announcement on Monday a snap election in less than four months.

Turkey, the EU, France and the UK have condemned latest Israel approving expand illegal settlements in the occupied West Bank.

"We reject this illegal decision of Israel, which carelessly continues to violate international law, especially the relevant UN resolutions and the 4th Geneva Convention," Turkey's Foreign Ministry said in a statement early Friday on its website.

The EU also released a statement by saying: “all settlement activity(by Israel) is illegal under international law and it undermines the viability of the two-state solution and the prospects for a lasting peace.”

“France condemns this decision, which expands settlement activity in the West Bank,” the French foreign office said in a statement.

Israel does what it wants

Diana Buttu, a Palestinian human rights lawyer, who used to work as an advisor to both Abbas and the Palestinian Authority, spoke to TRT World on Israeli violations against Palestinian rights.

Buttu describes Israeli actions of building and expanding settlements as an alarming threat for Palestinians.

For the Trump administration, Buttu said: “Nobody is stopping them(Israelis) in particular we haven’t heard anything from US in the past it used to condemn settlement expansions but is no longer bothering to that even.”

The oppressions against Palestinians will increase as the snap elections approaching in Israel on April 9, said Buttu.

Palestinians appreciate for the condemnations from the UN and countries around the world.

However, Buttu said, it is clear condemnations are not enough and are not stopping Israel.

“We are at a place now where we need more than just words we need Israel to face some type of sanctions” Buttu added.

Buttu said that Israeli public is very much an extreme ring wing public and every election its moving more to the right. The

The main reason of the decision on expanding settlements is to get more and more votes from the right for Netanyahu.

“This means one of three of the population are settlers and they have more rights than the Palestinians who own the land.”

That we have no running water electricity all that they want is they don’t want us there” Buttu added.

When Buttu was asked what is the main reason for Israel’s violations not punishing by the UN, she said that because of the United States.

“The US is Israel’s number one supporter, that is why I am hoping Turkey is the country that will lead the way because turkey has a different outlook than US.” 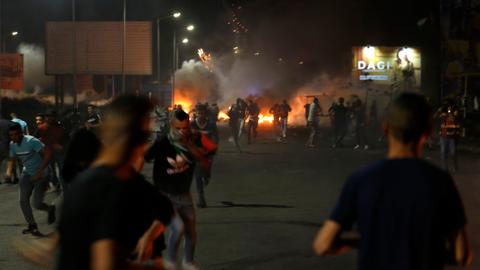