The headquarters of three ethnic parties of Iranian Kurds have been hit in northern Iraq as Iran's Revolutionary Guard accuses the groups of smuggling weapons into Iran.

The headquarters of the Komala Party, the Democratic Party of Iranian Kurdistan (IKDP) and the Kurdistan Freedom Party (PAK) were hit with missiles and drones, Iranian state television reported on Wednesday.

Seven people were killed and 28 wounded in the attacks, Kurdish Regional Government's health ministry in Erbil said in a statement.

Abdullah Mohtadi, secretary general of the Komala Party, said on his social media account that their headquarters in Sulaymaniyah were attacked by Iranian army drones.

Meanwhile, Hussein Yazdanpanah, the head of PAK, told reporters that their headquarters in Koysanca district in Erbil and Kirkuk's Altinkopru district came under attack.

READ MORE: Iran's Raisi: US 'trampled upon' nuclear accord with world powers

The Revolutionary Guard said it carried out an artillery attack last week in the Kurdish region of northern Iraq.

In a statement, the IRGC said its ground forces targeted the positions of Komala Party, accusing it of smuggling weapons into Iran.

The attacks come amid nationwide protests in the wake of the death of a 22-year-old Iranian woman in police custody last week, who was arrested for not wearing the hijab 'properly'.

Mahsa Amini belonged to a section of Iran with a large Kurdish population where protests have grown louder over the past week.

Who would win if Saudi and Iran go to war? 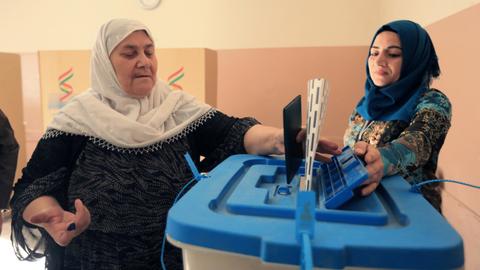