1
Blinken to visit Mideast as Palestine mourns killings by Israel
2
US charges officers with murder in Black man's death; Biden calls for calm
3
Biden calls Republicans' economic plans dangerous for US economy
4
Past US presidents, VPs asked to 'recheck' for secret files

Rouhani was speaking by phone to his French counterpart Emmanuel Macron, as Tehran and Washington engaged in an escalating war of words following Iran shooting down a US drone last week.

President Hassan Rouhani said Iran "never seeks war" with the US, state media reported on Wednesday amid a spike in tensions between the two countries.

"Iran has no interest to increase tension in the region and it never seeks war with any country, including (the) US," the president said, quoted by state news agency IRNA.

"We have always been committed to regional peace and stability and will make efforts in this respect," the Iranian president told Emmanuel Macron.

Iran on Tuesday criticised new US sanctions targeting the Islamic Republic's supreme leader and other top officials, saying the measures spell the "permanent closure" for diplomacy between the two nations.

For his part, Iran's president described the White House as "afflicted by mental retardation."

Rouhani went on to call the sanctions against Supreme Leader Ayatollah Ali Khamenei "outrageous and idiotic," especially as the 80-year-old Shia cleric has no plans to ever travel to the United States.

US 'lying' about talks offer

Rouhani said the new US sanctions showed Washington is "lying" about offering to negotiate.

"At the same time as you call for negotiations, you seek to sanction the foreign minister? It's obvious that you're lying," Rouhani said.

He also questioned the logic of blacklisting Khamenei and said it showed that Washington is "confused."

"The leader's assets are a Hosseiniye (Shia place of worship) and a simple house. Our leaders are not like other countries' leaders who have billions in an account abroad so you can sanction it, seize it or block it," Rouhani said.

"To sanction him for what? Not to travel to America? That's cute."

President Donald Trump enacted the new sanctions on Monday against Khamenei and his associates.

US officials also said they plan sanctions against Iranian Foreign Minister Mohammad Javad Zarif, something that drew Rouhani's anger during his televised address on Tuesday.

"You sanction the foreign minister simultaneously with a request for talks," Rouhani said.

Iran will never pursue a nuclear weapon Mohammad Javad Zarif said on Tuesday, according to the IRIB news agency.

He pointed to the past use of nuclear weapons by the United States and to recent comments by Trump that he had called off a military strike on Iran because it would have killed 150 people.

The US is the only country to have used nuclear weapons in war - two of them in World War II.

"You were really worried about 150 people? How many people have you killed with a nuclear weapon? How many generations have you wiped out with these weapons?" Zarif said.

"It is us who, because of our religious views, will never pursue a nuclear weapon," he added.

"The president has held the door open to real negotiations to completely and verifiably eliminate Iran's nuclear weapons programme, its pursuit of ballistic missile delivery systems, its support for international terrorism and other malign behaviour worldwide," Bolton said in Jerusalem.

"All that Iran needs to do is to walk through that open door."

The sanctions follow Iran's downing last week of a US surveillance drone, worth over $100 million, over the Strait of Hormuz, an attack that sharply escalated the crisis in the Persian Gulf.

After the downing of the drone, Trump pulled back from the brink of retaliatory military strikes but continued his pressure campaign against Iran.

Trump last year re-imposed sanctions on Iran after pulling the US out of the nuclear pact that world powers made with Tehran in 2015.

Other nations stayed in the deal, which eased sanctions on Iran in exchange for curbing its nuclear program.

Trump said the new sanctions are not only in response to the downing of the American drone.

The US has blamed Iran for attacks on two oil tankers this month near the Strait of Hormuz. Citing those episodes and intelligence about other Iranian threats, the US has sent an aircraft carrier to the Persian Gulf region and deployed additional troops alongside the tens of thousands already there.

US officials said Washington targeted Iran's missile systems with a cyber attack after the drone was shot down. Tehran said the cyber breach was unsuccessful.

The sanctions were announced as US Secretary of State Mike Pompeo was holding talks in the Middle East with officials in the United Arab Emirates and Saudi Arabia about building a broad, global coalition that includes Asian and European countries to counter Iran.

Pompeo is likely to face a tough sell in Europe and Asia, particularly from those nations still committed to the 2015 nuclear deal. 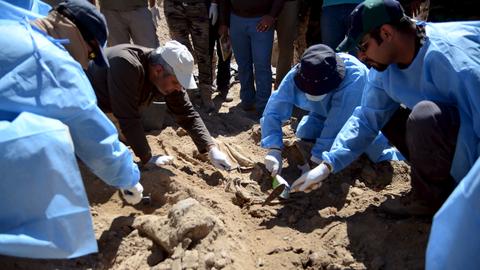 1
Blinken to visit Mideast as Palestine mourns killings by Israel
2
US charges officers with murder in Black man's death; Biden calls for calm
3
Biden calls Republicans' economic plans dangerous for US economy
4
Past US presidents, VPs asked to 'recheck' for secret files