French and Saudi leaders called Lebanese Prime Minister Najib Mikati to stress that Paris and Riyadh were committed to supporting Lebanon through its crisis.

French President Emmanuel Macron has announced a Saudi-French initiative to solve a diplomatic row between several Gulf states and Lebanon.

Macron, who was in Saudi Arabia for talks with Crown Prince Mohammed bin Salman as part of a Gulf tour, said on Saturday that Riyadh had committed to supporting reforms in Lebanon, helping it solve its crisis and preserving its sovereignty, according to Saudi television channel Asharq TV.

Macron said he and bin Salman had called Lebanese Prime Minister Najib Mikati to stress that Paris and Riyadh were committed to supporting Lebanon, the TV channel added.

After the meeting, Mikati said that the call was an important step to restore ties with Riyadh.

Macron has led international efforts to resolve the political and economic crisis in Lebanon. But despite staking a lot of his capital on the issue for more than a year he has failed so far to push the country's squabbling politicians to carry out economic reforms that would unlock vital foreign aid.

Lebanese Information Minister George Kordahi resigned on Friday ahead of Macron's visit in an effort to ease the rift, saying he was acting in his country's interest to help end the dispute.

In October, Riyadh expelled Lebanon's envoy to the kingdom, recalled its ambassador to Beirut and banned Lebanese imports after Kordahi made critical remarks about Saudi Arabia's role in the Yemen war.

Sunni Muslim Saudi Arabia and Shia Iran have long battled for influence in the region, including in Lebanon, which is struggling with a deep economic crisis and desperately needs financial support from regional and international donors.

READ MORE: Lebanon minister to step down in bid to ease crisis with Gulf 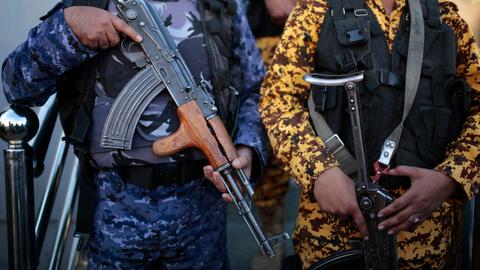