Israeli forces stormed the camp of Jenin and surrounded a house, which led to clashes with the Palestinians, local residents say.

Two Palestinians have been killed by Israeli forces during an incursion into the Jenin refugee camp in the northern occupied  West Bank.

The Palestinian Health Ministry said in a statement: "Two young men, Muhammad Ayman al Saadi, 26, and Naim Jamal Zubaidi, 27, were killed by the Israeli occupation on Thursday during its aggression on the Jenin camp."

Israeli forces stormed the camp of Jenin and surrounded a house, which led to clashes with the Palestinians, local sources said.

Witnesses added that the raid lasted for about 90 minutes.

The Jenin Battalion of the Al Quds Brigades mourned the two young men.

It indicated that the two men were among its leaders and that it would move forward in resisting the Israeli occupation.

Tensions have been running high across the occupied West Bank in recent weeks amid repeated Israeli raids to detain what they call "wanted Palestinians" or to demolish Palestinian homes.

The raids spark clashes with Palestinians and have caused numerous fatalities.

Israeli and Palestinian estimates indicate there are about 650,000 settlers living in 164 settlements and 116 outposts in the West Bank, including in occupied East Jerusalem.

Will the Arab League try and save face this time? 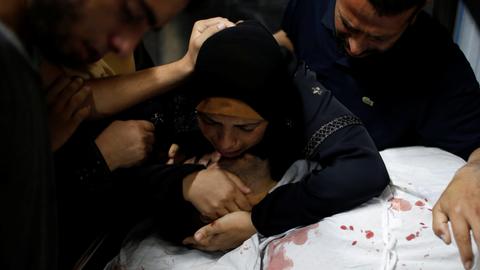