In Ankara's recent talks with Baghdad, the fight against the PKK in Iraq and reconstruction of the country top the agenda. But how and for how long has the PKK been based in Iraq, Turkey's neighbouring country in the southeast? We break it down:

The PKK is an armed drug and human trafficking terror group that has been carrying out attacks in Turkey since 1984, a couple of years after the group was established. It is responsible for tens of thousands of civilian and security personnel deaths in the region during an almost four-decade-long campaign of terror.

The PKK has been designated a terror organisation by Turkey, the US and the EU.

They have been based in the mountainous northern parts of Iraq on the Turkish border since 1982, even before they started their terror campaign. And in Makhmour, in the south of KRG region, since the beginning 1990's.

The group, which carried out several suicide bomb attacks targeting civilians in Turkey, strengthened its positions in Iraq after a power vacuum following former Iraqi regime leader Saddam Hussein’s fall with the US invasion in 2003.

That has led to tensions from time to time between Ankara and Baghdad, over Ankara's criticism of not being capable of preventing PKK's presence in their soil.

Here is a breakdown of PKK bases in Iraq with how and since when they have been based there:

The Qandil Mountains are an extension of the Zagros Mountains range, which covers parts of southern Turkey, northern Iraq and northeastern Syria.

Peshmerga forces, the armed forces of the semi-autonomous Kurdish Regional Government (KRG) in northern Iraq, used the mountain as shelter to protect themselves from former Iraqi leader Saddam Hussein in the 1980s, before they gained autonomy.

However, after the Gulf War in 1991, Peshmerga abandoned the mountains and turned back to urban areas that were secured by the US, and the PKK took the control of Qandil and started using it as their base.

Despite the region's proximity to KRG-controlled areas, the terror group has been using the region autonomously, enjoying KRG's indifference. And the Iraqi central government is neither geographically nor militarily close to controlling the mountains.

The PKK has more than one camp as their base in the mountain, preventing their destruction by a single attack.

There are at least 13 camps located in different parts of the mountain, including the main base where the heads of PKK shelter, including Murat Karayilan and Cemil Bayik.

Located some 60 km's south of KRG's capital Erbil, the Makhmur district is a part of Nineveh province. Kurdish Peshmerga forces settled there after the 2003 US-led invasion of Iraq.

But the Makhmur refugee camp within the district is controlled by the PKK.

The camp was established by the central Iraqi government and the UN High Commissioner for Refugees (UNHCR) in 1998 for the Kurdish people who fled their homes both internally and externally in the early 1990s.

It mostly includes ethnic Kurds from southeast Turkey, which were forcefully displaced from their villages by the PKK and relocated in northern Iraq in 1992, in order to clear the area of clashes and to create a base for itself in Iraq where it can recruit new militants.

That forced migration led the Kurds finding a new location in Makhmur, and in order to support them, the UN decided to create the refugee camp after six years.

The PKK had a strong presence in the camp until the US invasion, creating problems between Turkey and the UNHCR. Later, when the conflict intensified in Iraq and most of the UN employees left the country, the PKK gained more control in the camp, even forcing young Kurds to join the PKK.

Their presence significantly increased after Daesh came very close to the camp, and the PKK cleared the area of the group in alliance with the Peshmerga. Despite the Peshmerga playing a crucial role in defeating Daesh and maintaining its forces in Makhmur, the PKK have yet to withdraw. Now, not only in the camp but also on the hills around the camp, the PKK has a presence. Turkey has called on the Iraqi government to close the camp.

Sinjar tops Turkey's agenda when it comes to talks with Baghdad on the fight against PKK. That's because the Turkish military can conduct military operations on PKK bases in the Qandil Mountains, but Sinjar is protected by the Iraqi army.

PKK's Syrian affiliate, the PYD, was founded in 2003. And when Daesh came to Syria in 2013, the US decided to use their armed wing, the YPG, as a ground force in their fight against the group.

The YPG's fight against Daesh draw international attention since late 2014 and has gained more military and diplomatic support from the West.

But the YPG has not left control of the areas they defeated Daesh to the local people, and now the group holds a quarter of Syria, mostly on the Turkish and Iraqi border.

Sinjar district lies in the west of Iraq on the Syrian border, neighbouring the YPG-held areas. When Daesh arrived in Sinjar in 2014, they massacred the Yazidis, an ethnic and religious group who speak a dialect of Kurdish.

That also drew the attention of the West. And again with that support, the YPG in Syria and the PKK in Iraq arrived in Sinjar, in the guise of rescuing the Yazidis. They defeated Daesh in the area with the help of the US-led coalition's air strikes and they have kept control of Sinjar since then.

Although the Peshmerga played a major role in purging Sinjar of Daesh in 2015, the PKK has largely retained control of the district, where it refuses to allow Peshmerga forces to assume control of the area.

The armed Yazidis in Sinjar, with the help of PKK terrorists, created Sinjar Resistance Units, which is another offshoot of the PKK. And that created a new base for the terror group in northwest Iraq.

Sinjar is included in the disputed areas of Iraq, which was defined in the constitution. When the KRG held a non-binding independence referendum in September 2017, the Iraqi army moved in on the disputed areas that the KRG's Peshmerga had controlled. Along with other disputed areas such as Kirkuk, the central Iraqi government in Baghdad took control of Sinjar in October.

However, the Iraqi army has been sharing control of Sinjar with the PKK-affiliated groups, in a largely peaceful but uneasy alliance. The Iranian-backed Shia militias (Popular Mobilization Units) who later became a legal part of the Iraqi army have also been a part of this alliance.

Turkey has been considering a cross-border operation into Sinjar to clear the region from the PKK following its successful military operation in Syria’s Afrin that drove YPG out.

The district is a strategic location as a bridge between the PKK and its Syrian extension the YPG, with which the United States cooperates.

The US has been delivering weapons and ammunition to the YPG via northern Iraq, a move that led to tensions with Turkey.

Turkey has already been conducting cross-border and air operations against the PKK camps in northern Iraq within KRG borders, but a joint operation with the central government in Baghdad would be the first.

There is no signal of any agreement from the Iraqi side, as they have been trying to give assurances to Ankara, saying there wouldn't be any attack on Turkey from Sinjar, and the groups are under their control.

South of the Qandil Mountains lies Sulaymaniyah, and Ankara believes the Patriotic Union of Kurdistan (PUK) provides the PKK a safe haven when they need to go to the city, as it has been a logistic hub for the PKK in order to transport supplies as the city has an operational airport.

The PUK is known by its close ties with Iran, which neighbours Sulaymaniyah.

The latest critical sign of PKK presence in Sulaymaniyah emerged in August 2017. PKK members were seen crossing checkpoints in the city on their way back to the Qandil Mountains.

In the aftermath of the non-binding independence referendum in the KRG in September 2017, Baghdad claimed that new PKK bases were allowed in Kirkuk by the PUK.

According to the Iraqi constitution, Kirkuk is a disputed area between the Erbil and Baghdad administrations. After Daesh had come to Kirkuk, PUK's Peshmerga arrived in Kirkuk and cleared the area of Daesh. Since then, PUK has had control of the disputed areas.

On October 15, the Iraqi central government accused the KRG of bringing PKK members to the disputed oil-rich city of Kirkuk, and said it considered the move a “declaration of war."

In a couple of days, the Iraqi army defeated the Peshmerga from all the disputed areas and took control of Kirkuk.

Since October, when the Iraqi army took control of Sinjar and Kirkuk, Baghdad has been telling Ankara that there is no need for any other military operation to fight the PKK.

Despite officially coming under the control of the Baghdad government, the disputed areas including Sinjar, Kirkuk and Sulaymaniyah still have critical PKK presence.

The Iraqi army officially took control of the Sulaymaniyah Airport, too, but it has never been fully controlled. That's why Ankara says even though it's limited, the airport is still being used by the PKK.

Turkey has been in talks with the central Iraqi government over reconstruction of the damaged parts of the country, a senior Turkish official told TRT World.

The plans include a highway between Turkey’s Ovakoy, where an alternative border gate to the Habur might be opened, and Baghdad, said the official who spoke on condition of anonymity.

Having an additional border gate between Turkey and Iraq has been a project since the early 90s, but following the independence referendum, Baghdad and Ankara started taking concrete steps.

The highway will be completely outside the KRG-controlled areas where there is still a PKK presence.

It would also cut a route to northern Syria, which the US uses to supply weapons to the YPG, the Syrian extension of the PKK. 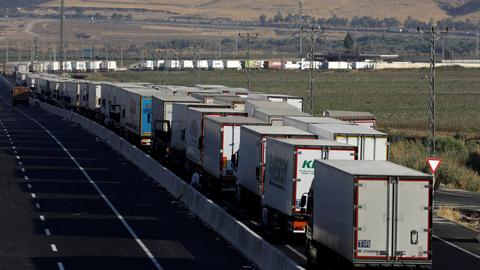