The kingdom expels Canadian ambassador and recalls its own envoy after Ottawa insisted that Riyadh releases human rights activists.

Saudi Arabia announced on Monday that it was expelling the Canadian ambassador and had recalled its envoy while freezing business ties with Ottawa, over what it called "interference" in its internal affairs.

The move follows vigorous calls by Canada for the immediate release of human rights activists swept up in a new wave of detentions.

Very alarmed to learn that Samar Badawi, Raif Badawi’s sister, has been imprisoned in Saudi Arabia. Canada stands together with the Badawi family in this difficult time, and we continue to strongly call for the release of both Raif and Samar Badawi.

"The kingdom of Saudi Arabia... will not accept interference in its internal affairs or imposed diktats from any country," the foreign ministry tweeted.

"The kingdom announces that it is recalling its ambassador... to Canada for consultation."

#Statement | KSA through its history has not and will not accept any form of interfering in the internal affairs of the Kingdom. The KSA considers the Canadian position an attack on the KSA and requires a firm stance to deter who attempts to undermine the sovereignty of the KSA.

The ministry said that the Canadian ambassador to Riyadh had 24 hours to leave the country, and announced the "freezing of all new commercial and investment transactions" with Ottawa.

The move came after the Canadian embassy in Riyadh said it was "gravely concerned" over a new wave of arrests of human rights campaigners in the kingdom, including award-winning gender rights activist Samar Badawi.

"We urge the Saudi authorities to immediately release them and all other peaceful #humanrights activists," the embassy tweeted on Friday.

The arrests come weeks after more than a dozen women's rights campaigners were detained and accused of undermining national security and collaborating with enemies of the state. Some have since been released.

The crackdown on the activists has coincided with Saudi attempts to loosen restrictions on women in the kingdom.

Crown Prince Mohammed bin Salman spearheaded a much-praised effort earlier in the year that allowed Saudi women to drive cars for the time.

Samar Badawi received the 2012 International Women of Courage Award from the US State Department. She has been a vocal critic of harsh Saudi laws such as the guardianship system which requires a woman to seek permission of a male relative to travel or work.

Bahrain said it stood with Saudi Arabia in the political row, rejecting what it called Ottawa's interference in Riyadh's internal affairs.

"The Kingdom of Bahrain affirms its full solidarity with the Kingdom of Saudi Arabia ...against anyone attempting to undermine its sovereignty," the Bahraini foreign ministry said on Twitter. 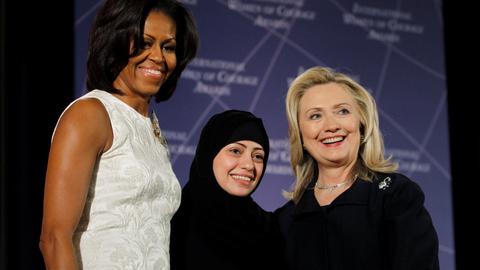