US, Ireland, Norway press for extension of cross-border aid into NW Syria

The Bab al Hawa crossing from Turkey into Syria will close on July 10 unless it receives authorisation to stay open for another year in a United Nations Security Council vote.

The United States, Ireland and Norway have called on the UN Security Council to extend an agreement to keep open a border crossing through which humanitarian aid reaches war-torn Syria's rebel-held northwest.

While Russia skipped the negotiations on Tuesday, China said in addition to the aid delivery it also wanted to tackle the impact of Western sanctions and the need to expand deliveries across conflict lines.

The Bab al Hawa crossing from Turkey into Syria will close on July 10 unless it receives authorisation to stay open for another year in a United Nations Security Council vote on Thursday.

"We cannot accept less than what we have today. And that's one border crossing for 12 months that's providing support for millions of Syrians," said the American ambassador to the UN, Linda Thomas-Greenfield, after a closed-door meeting on humanitarian assistance to Syria.

If an extension of the cross-border aid mechanism is vetoed, she warned "the repercussions are obvious, people will starve to death".

Some three million people live in militant-dominated northwest Syria, more than half displaced by the country's decade-long conflict.

For the past year, international organsations have been able to bring in medicine, food, blankets and Covid-19 vaccines through the Bab al Hawa crossing, the only crossing for aid into the region that bypasses Damascus.

According to France's UN ambassador, Nicolas de Riviere, since the beginning of the year, 50 percent of requests to deliver humanitarian aid across front lines have been rejected by the Syrian regime.

Before the sit-down, Irish ambassador to the UN Geraldine Byrne Nason told reporters "we're hoping to see a successful renewal" of the cross-border aid mechanism, and warned of a potential "humanitarian catastrophe."

"We understand its politically sensitive, we're making a purely humanitarian case," she said.

Ireland and Norway, non-permanent members of the UNSC, presented a draft resolution in late June that seeks to keep the Bab al Hawa crossing open for one year and to reopen a second crossing point, Al Yarubiyah, which allows supplies to reach Syria's northeast from Iraq.

Norway's UN envoy Mona Juul said it was "incredibly important" to get the "maximum" assistance into Syria.

"It's a lot at stake, it's really a life and death issue for so many," she added.

Humanitarian organisations have been pleading for months for an extension of the UN authorisation.

READ MORE: Cross-border aid must reach Syria, with or without Russia’s approval

Russia skipped UN Security Council negotiations on Tuesday on whether to extend approval for cross-border aid access into Syria, diplomats said, as China pushed for "solutions" to its concerns about unilateral sanctions and aid transparency.

"The cross border aid operation has been the safest and most reliable way of getting aid to people," Mark Cutts, UN deputy regional humanitarian coordinator for the Syria crisis, told an event at the United Nations in New York, organised by Canada, Dominican Republic, the Netherlands, Qatar and Turkey.

"In the last year we've been delivering an average of just over 1,000 trucks a month of aid into northwest Syria. It's absolutely vital now that we keep this aid operation going," Cutts said.

While Russia - an ally of Syrian regime leader Bashar al-Assad -did not show up to negotiations on Tuesday, diplomats said they were still separately engaging with key members. Russia's UN mission did not immediately respond to a request for comment.

China said on Tuesday it wants the UN Security Council to not only extend humanitarian aid deliveries to Syria from neighboring countries but to tackle the impact of Western sanctions and the need to expand deliveries across conflict lines.

His comments came as the 15 council nations have just four days left before the mandate for cross-border aid expires.

Chinese Ambassador Zhang Jun told reporters after closed briefings to the council and a discussion among members on a draft resolution to continue cross-border deliveries that he hopes “with more diplomatic efforts we can find a solution” not just on cross-border aid.

“For China, definitely we want to see a solution concerning unilateral sanctions, concerning cross-lines, concerning the transparency of the cross-border. Not just talking about cross-border but about the general situation in Syria,” Zhang said.

The council first authorised a cross-border aid operation into Syria in 2014 at four points. Last year, it reduced that to one point from Turkey into a rebel-held area in Syria due to Russian and Chinese opposition over renewing all four.

Russia has said the aid operation is outdated and violates Syria's sovereignty and territorial integrity. In a swipe at the United States and others, Russia and China have also blamed unilateral sanctions for some of Syria's plight. 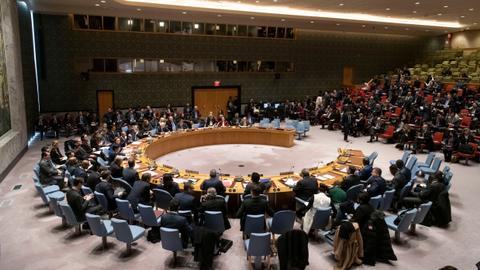 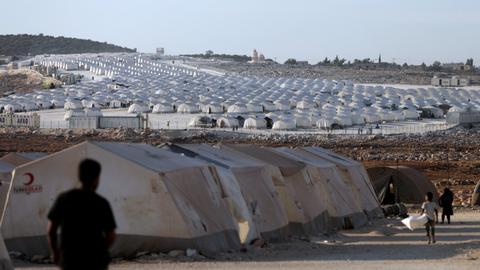