US singles out Iran for Saudi oil attacks

US President Trump says it looked like Iran was behind attacks on oil plants in Saudi Arabia at the weekend that raised fears of a fresh Middle East conflict, but adds he did not want war with anyone.

The United States readied its response on Monday to the "unprecedented" attack on Saudi oil facilities as President Donald Trump said Iran was likely to blame, fanning new fears of conflict in the Gulf region.

Trump said he was ready to help key ally Saudi Arabia counter the weekend drone attacks, which triggered a record leap in global oil prices, but would await a "definitive" determination on who was responsible.

"It is certainly looking that way at this moment," Trump told reporters when asked if he believes Tehran carried out the attack.

The president said "we pretty much already know" and "certainly it would look to most like it was Iran" but that Washington still wanted more proof.

"We want to find definitively who did this," Trump told reporters in the Oval Office, where he was meeting with Bahrain's Crown Prince Salman bin Hamad bin Isa al Khalifa.

"You're going to find out in great detail in the near future," he said. "We have the exact location of just about everything.

"With all that being said, we'd certainly like to avoid" war, Trump said.

"I don't want war with anybody but we're prepared more than anybody," he added.

Details of the Saturday strikes on Abqaiq –– the world's largest oil processing facility –– and the Khurais oil field in eastern Saudi Arabia remained unclear, but left crude oil output by the world's top exporter slashed in half.

The Iran-supported Houthi rebels in Yemen claimed responsibility for the attack.

But the Riyadh-led coalition fighting the Houthis said earlier Monday that the weapons were Iranian-made, and it remains unclear where they were launched from.

Trump said the United States would be talking to Saudi Arabia, the United Arab Emirates and "many of the neighbours out there that we're very close friends with.

"We're also talking to Europe," he said, "a lot of the countries that we're dealing with, whether it is France, Germany, talking to different folks and figuring out what they think.

"But I will tell you that was a very large attack and it could be met with an attack many, many times larger, very easily by our country," he said.

Trump spoke to reporters shortly after US Defense Secretary Mike Esper said the US military is preparing a response to the attack on the Saudi oil facilities.

After briefing Trump in the White House, Esper singled out Iran as undermining international order, without directly pinning blame on Tehran for the attack.

Esper said he and the Pentagon leadership met with Trump in the wake of Saturday's attack, which analysts say appears to have involved drones and possibly cruise missiles launched from a nearby country. 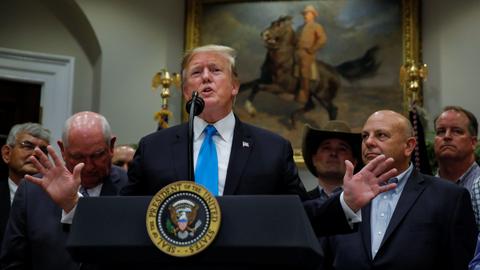 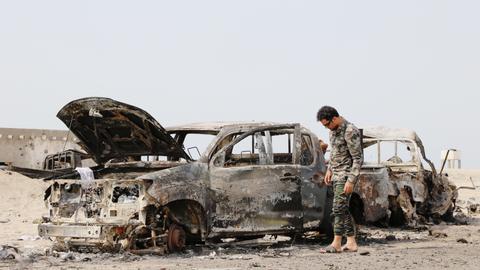 Divide and rule: How the UAE is wreaking havoc in war-torn Yemen