Contrary to the Houthi claim, UN investigators suggest their evidence has increased the possibility that it was Tehran that launched the attack using long-range and sophisticated weaponry.

The report by the United Nations has found that Yemen’s Houthi militias did not launch the attack on Saudi Arabia’s oil facilities last September, bolstering the claim that it was Iran's doing.

The United States, European powers and Saudi Arabia outrightly blamed Iran for the attack on the Saudi Aramco oil plants in Abqaiq and Khurais, a charge Tehran denied. Iran-backed Houthi militias claimed responsibility for the attack.

The confidential report submitted by independent UN experts to the Security Council Yemen sanctions committee was accessed and reported by Reuters.

According to the report: “Despite their claims to the contrary, the Houthi forces did not launch the attacks on 14 September 2019.”

The UN investigators said they doubted that the drones and land-attack cruise missiles used in the strike “have a sufficient range to have been launched from Yemeni territory under the control of the Houthis”.

The investigators, who monitor sanctions on Yemen, also said they do not believe that “those comparatively sophisticated weapons were developed and manufactured in Yemen”. They were not tasked with identifying who was responsible for the Saudi attack.

However, the report reveals a detail that is in line with an early US investigation and increased the likelihood that Iran is responsible for the attack.

The UN investigation stated: “[Saudi oil facilities] were approached respectively from a north/northwestern and north/northeastern direction rather than from the south, as one would expect in the case of a launch from Yemeni territory.”

The US investigation which was presented to the UN Security Council showed that new evidence and analysis of weapons debris recovered from the attacks indicates the strike likely came from the north.

It said the investigation had identified several similarities between the drones used in the raid and an Iranian designed and produced unmanned aircraft known as the IRN-05 UAV.

US Special Envoy for Iran Brian Hook believes this newly-declassified information was more evidence that Tehran was behind the attack.

“The UAVs flew into Saudi Arabia from the north, and the recovered debris is consistent with Iranian-produced material,” he said.

The attack skyrocketed tensions in the already strained relationship between Saudi Arabia and Iran, arch-rivals in the Middle East.

The 17-minute strike by 18 drones and three low-flying missiles caused a spike in oil prices, fires and damage, shutting down more than 5 percent of global oil supply.

Last November, a Reuters investigation revealed that Iran’s Supreme Leader Ayatollah Ali Khamenei approved the attack on the Saudi oil facilities with a warning: that the Iranian forces had to avoid any Saudi civilians or Americans.

According to the report, the missiles were launched from Ahvaz airbase in southwest Iran, which is about 650km north of Abqaiq where the oil facility is located. Iran rejected the investigation.

Hook believes there is no evidence that contradicts the possible  Iranian involvement.

“As many nations have concluded, there are no plausible alternatives to Iranian responsibility,” he said. 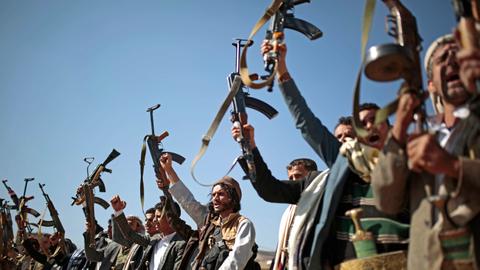