The two-month truce, which will start on the first day of the Muslim holy month of Ramadan in the Gulf, will halt all air, ground and maritime operations in the war-torn country.

Yemen's warring parties have agreed to a two-month truce starting Saturday, the first day of the Muslim holy month of Ramadan in the Gulf, with the possibility of an extension.

"The parties to the conflict have responded positively to a United Nations proposal for a two-month truce which comes into effect tomorrow April 2 at 1900hrs," UN special envoy for Yemen Hans Grundberg said in a statement on Friday.

"The truce can be renewed beyond the two-month period with the consent of the parties."

"During these two months, I plan to intensify my work with the parties with the aim to reach a permanent ceasefire, address urgent economic and humanitarian measures and resume the political process," he said.

“I call on the parties to fully adhere to and respect the Truce and its elements and to take all necessary steps to immediately implement it,” he added.

UN Secretary-General Antonio Guterres welcomed the truce and expressed hope for a "political process" to bring peace to the country.

"Now you must take that momentum in order to make sure that this truce is fully respected," Guterres told reporters.

"This demonstrates that even when things look impossible, when there is the will to compromise, peace becomes possible," Guterres added.

The Saudi-led coalition fighting Yemen's Houthi rebels said late Tuesday that it will suspend military operations to ensure the success of ongoing consultations, and to create a positive environment for peacemaking efforts during the Muslim holy month of Ramadan.

Yemen has been engulfed by violence and instability since 2014, when Houthi rebels captured much of the country, including the capital Sanaa.

A Saudi-led coalition, which seeks to reinstate the Yemeni government, has worsened the situation, causing one of the world’s worst man-made humanitarian crises.

Nearly 80 percent, or about 30 million people, are in need of humanitarian assistance and protection, and more than 13 million are in danger of starvation, according to UN estimates. 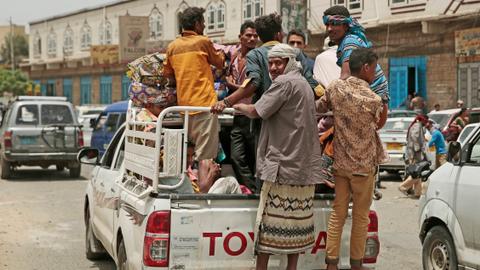