A growing cause of concern is the arming of the Eastern Aegean Islands, which had been ceded to Greece on the condition of maintaining their demilitarised status.

To understand the present, a look at the past is important.  For, history often throws proper light on contemporary events. And to get a true measure of the controversy—unnecessary, to say the least—over a cluster of islands on the Aegean Sea, we must go back several decades when the 23 islands were transferred to Greece.

The two agreements explicitly stated that Greece would maintain the demilitarised status of the islands, collectively known as the Eastern Aegean Islands.

But Greece did not keep its word. Available information shows that Greece has effectively militarised 16 of those 23 islands since the mid-1950s in clear violation of international laws.

What are the international agreements that impose legal obligations on Greece about the demilitarised status of the Eastern Aegean Islands?

By order of chronology, the legal instruments setting up a demilitarised status for the Eastern Aegean Islands are:

The 1914 decision of Six Powers: The islands of Thassos, Samothrace, Lemnos, Ag Efstratios, Lesvos–Mitylène, Psara, Chios, Samos, and Ikaria under Greek occupation as of 1914 were ceded to Greece by the 1914 Decision of Six Powers, Great Britain, France, Russia, Germany, Italy, and Austria-Hungary. It was done on the condition that they should be kept demilitarised. Greece consented and sent a written confirmation to the Ottoman Empire on February 21, 1914, that she had committed to keeping those ceded islands ‘demilitarised’ as foreseen in the Decision. The 1923 Lausanne Peace Treaty confirmed the above-mentioned Decision through Article 12.

Additionally, Article 13 of the Lausanne Treaty further strengthened the modalities of the demilitarisation for the central Aegean islands of Lesvos, Chios, Samos, and Ikaria. It imposed certain restrictions related to the presence of military forces and establishment of fortifications as part of Greece’s undertakings.

The Treaty has an annexure titled The Convention of the Turkish Straits, which further defined the stricter demilitarised status of the islands of Lemnos and Samothrace due to their location close to the Turkish Straits and hence strategic concerns to the security of Türkiye.

Greece must have been very much aware of this but still went ahead and militarised and fortified the island with assault fighter jets and army brigades.

Contrary to the claims of Greece, the 1936 Montreux Convention did not bring any change to the demilitarised status of Lemnos and Samothrace since it includes no clause about this. In fact, in response to a Turkish protest on Lemnos’s re-militarisation, Greece returned a nota verbale—an unsigned diplomatic note—in 1969 that she has not fortified the island of Lemnos, which she said would be contrary to the Lausanne Peace Treaty, thus tacitly admitting that the treaty remains intact, valid, and binding.

The other 14 islands which must be kept demilitarised are relevant to the 1947 Paris Peace Treaty that ended World World II. They are named the "Dodecanese Islands" and include Stampalia, Rhodes, Calki, Scarpanto, Casos, Piscopis, Nisyros, Calimnos, Leros, Patmos, Lipsos, Symi, Cos, and Kastellorizo.  They were ceded to Greece on the explicit status that they must remain comprehensively demilitarised due to the overriding importance of these islands for Türkiye’s security. Even their territorial waters should be immune from the presence of naval vessels, their anchoring, and visiting as articulated in Annex 13-D of the Paris Treaty, which also includes temporary or permanent deployment of military aircraft and assets. So, the concept and necessity for demilitarisation continued in the 24 years between the two world wars.

Greece claims that the Paris Treaty has nothing to do with Türkiye as Ankara was not a signatory (res inter alios acta—something transacted between other parties) or that it had to militarise the islands as an act of self-defence as stipulated in Article 51 of the UN Charter. But facts and state practices state otherwise.

For instance, Greece had admitted in a 1964 response to Türkiye’s protest through a diplomatic note, that she had never considered militarisation of the Dodecanese Islands as their status was formulated in the Paris Treaty. This was a  tacit admission that Türkiye has the right and its own interests in protesting the violation of the demilitarisation clauses. Türkiye also believes that the demilitarisation agreement constitutes an ‘objective régime’ where, according to general rules of treaty law, such an exclusion does not hold.

Adding to that, the UN Charter Article 51 never mentions prospective or conditional Rights of Self Defence and also measures taken justifying it could not be permanent. Any Greek measures as such are subject to the UN Security Council’s vetting which has never been brought up to. So, all the Greek claims pledging to honour the legal obligations remain groundless.

Greece has not only tried to circumvent her commitments emanating from international law and agreements, but she has also persistently tried to make use of NATO’s rules, procedures, exercises, and planning systems to that end. In some cases, those attempts have been resisted by Turkish officials, officers, and diplomats on site. In most cases, Greece’s attempts had failed.

For example, the NATO Defence Planning System has been blocked for at least a couple of decades due to Greek proposals asking for NATO’s accommodation of Greek military fighters and army units in the demilitarised islands of Lemnos.  In some other cases, they had raised the demand in political forums in which the highest NATO officials had to counter Greek ambitious and illegal requests for NATO military presence in one or more of the demilitarised islands.

The last example of a failed Greek attempt was in the Tiger Meet Exercises of May 2022 in which the Greek NATO exercise planners embedded different military units in the demilitarised islands which resulted in Türkiye’s withdrawal of her contributing forces. Similarly, a former NATO Secretary-General, Joseph Luns, disagreed with a Greek attempt to indirectly nullify legally binding obligations maintaining Lemnos Islands’ demilitarised status.

There seem to be even earlier Greek attempts in the same direction. For example, in 1957, former NATO Secretary-General  Hastings Ismay resisted Greek requests for NATO funding for building an ammunition depot on the island of Leros, one of the demilitarised islands where Athens later established a Naval Forward Base. One of the latest attempts was countered by Supreme Allied Commander Europe ( SACEUR), General James  Jones, who said in 2006 that the NATO military should avoid using demilitarised status of the Eastern Aegean Islands in joint exercises and NATO infrastructure support should not be channeled for the demilitarised Lemnos Island.

To Vima, a Greek weekly that means The Tribune in English has pointed out the reality to Greek politicians, that their act of violating binding treaties has gathered no sympathy from NATO as well.

All in all, there is a direct linkage between the possession of sovereignty over those islands and their demilitarised status. Greece does not want to give up her ambitions of bypassing her international commitments and is not interested in resolving these issues by peaceful means. They disregard the jurisdiction of the sole forum for that, which is the International Court of Justice (ICJ). In fact, when Athens accepted the Court’s jurisdiction in 1993, she introduced a clause preventing the Court from taking up militarisation measures. This was amplified by other potential sources of disputes between Türkiye and Greece at a later stage. That seems to have aimed at restraining ICJ from looking at other existing disputes in the Aegean Sea. As such, other tools for settling this kind of dispute are highly limited.

Therefore, beyond protesting Greece for violating binding international instruments, there remain only the political means to squeeze Greece to a point where politico-military means could be used in concert with each other, in order to force Athens to respect the international laws.

Türkiye has made two appeals to the UN in the last year, explaining the situation in the Eastern Aegean.  The UN too had asked Greece about her actions of violating the security and stability of the region. In return, Greece hastily referred them to the alleged Turkish violation of Greek airspace, in late May this year, besides levelling other accusations against Ankara.

But as the facts show, Greece is just clinging onto straws by deliberately attempting to draw attention away from its own illegal acts.

I have the feeling that this time Türkiye is approaching the issue very seriously, and I expect a little wisdom and prudence from Greece in the same manner. Dr. Ali Deniz Kutluk is a retired admiral who served in the Turkish Army for almost four decades. He currently works as an academic and lectures on International Maritime Law. 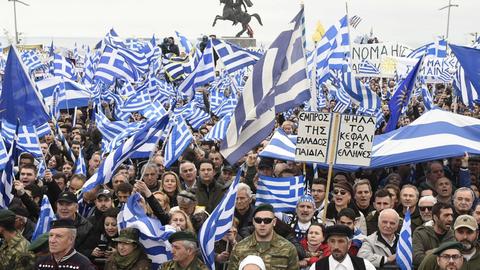