Is Steve Bannon the biggest threat to the Trump administration?

Donald Trump's former White House Chief Strategist has the power to turn Trump's base, and the media, against him.

Steve Bannon’s role in a recent book which ridicules Trump and paints a picture of chaos and incompetence in the White House is about to place the former chief strategist at the centre of media attention. But the legal ruckus might bring down Trump. Here’s how.

Of all of the many blundering decisions Donald Trump has made whilst in office, picking a fight with his former chief strategist Steve Bannon is going to be his worst – and possibly might even be the decision which becomes the nemesis of his entire presidency.

Bannon, who is believed to have played a key role in the publishing of an incendiary book by Michael Wolff, has sparked an unprecedented attack on himself by Trump, following a series of sensational claims about the US president’s buffoonery in the White House.

While Bannon’s own friends tell me that the Breitbart chief wasn’t actually attacking Trump, the president himself sees the work of Bannon for what it is and has hit back, in a scathing, vitriolic rebuttal, designed once and for all to destroy the Breibart chief’s reputation - which some already predict is in tatters.

The attempt by Trump though to downplay Bannon’s role isn’t fooling anyone and for such a statement to be made, merely reinforces Bannon’s importance.

The problem for Bannon is that he put Trump in office and once that was done, his genius was quickly seen as a hindrance. Trump very early on in the White House realised that Bannon would want payback with power. And, being the smartest guy in Trump’s entire team, was seen immediately as a threat, rather than an asset.

Certainly Trump is angry with Bannon for lifting the lid on everything from the ‘treasonous’ meetings with Russian officials or the phalanx of colleagues and friends who don’t believe he is capable of the job right through to the hilarious anecdotes about Trump locking himself in his bedroom, calling his friends late at night to complain about the travails of his job (only for them to leak them to the press), or even aides worrying about his state of mind.

Top of the list of damaging allegations will be Bannon’s prediction of money laundering being the centre of the Russia meetings’ probe. But that’s not what this spat is about.

Trump is trying both to get Wolff’s book banned and to destroy Bannon for the simple reason that it reveals how no one on Trump’s team – and not even the man himself – believed he would win the presidency. When this sinks into mainstream media and the general public, it will harm Trump immeasurably. Even when he entered the Oval office, Bannon took bets on how Trump would be forced out of the job; Bannon never rated Trump and even earlier in the campaign, saw him as a loser.

The total no-confidence vote from Trump’s own team is as shocking as it is embarrassing and Trump’s response is lucid and quick. Bannon will have to be crushed.

But how? Trump’s logic is patently weak and not even germane to the core of the matter: Trump’s people have no confidence in him as President.

Trump has done the very thing that any media advisor would tell him not to do. To attempt to ban the book will only guarantee that it stays a number one best seller and promotes it tenfold.

Hitting Bannon seems even more idiotic given the Breitbart chief’s fortuitous power over American journalists who take him much more seriously than Trump, who likes to pretend that Bannon had nothing to do with his election victory.

Yet Trump conveniently forgets that Bannon was having great success in destroying Hillary Clinton even before August 2016. His own documentary ‘Clinton Cash’ which exposed the murky world of the Clintons’ own foundation did infinite damage to the Hillary campaign. It was this legacy which made Trump go to Bannon in the first place, who, once employed made the key difference with media, which gave Trump the edge.

It was all about how seriously US media took Trump - and Bannon was the difference.

And now Trump is attempting to destroy Bannon, through the media, a ruse as stupid as a blind man expecting to win a sword fight with a musketeer.

Trump’s refusal to listen to advisors is really starting to show. To actually take on Bannon through the media might actually be his most suicidal act as president and might even oust him from the Oval Office.

Firstly, to date there isn’t one single US media outlet which has a determined focus on exposing Trump and his failings. US media is largely weak and indecisive and tends to obsess itself with Trump’s tweets in preference to old fashioned journalism.

Bannon may well be the beacon for many editors to follow as he is, after all, the guy who knows where all the bodies are buried. If there is ever a tipping point for US editors, it will be now with the Bannon case.

Secondly, Bannon is considering a defamation case against Trump for publicly degrading him as insane and being entirely ineffective.

Trump is too stupid to realize that this is a case which Bannon doesn’t need to win as US defamation laws will allow US journalists to write up all sorts of new, unproven assertions of Bannon, which until now are protected by law. This, on its own, might open a Pandora’s box of more hilarious anecdotes about Trump’s stark inability to function and could stir a renewed media frenzy against him.

Thirdly, Trump is doing all he can to prevent free speech, a subject so cherished by Americans, that it will surely blow up in his face. By trying to block the publication of the book he risks stirring up a real loathing by many Americans who will see him as tearing apart a sacred part of what America is built upon.

Will he extend this imbecilic logic by slapping lawsuits on media outlets that have already received electronic versions of the book and have written – and quoted – from it? It’s too late. The bullet has left the chamber.

If he was to stand any chance of blocking it, he should have done it weeks before it ever got anywhere near printing.

After months of playing this churlish game with media of distracting editors with a series of crises which he cooks up around the world, coupled with the hourly tweets which keeps journalists from looking at hard issues in America, media finally has its turn now to devour a subject which can be discussed for days and even months in TV studios cheaply and with guaranteed ratings.

The Wolff book and Trump’s erroneous reaction to it is going to dominate websites and column inches as it's a gift on a platter for content-starved editors. In many ways, Trump created this clickbait and Trump’s stupidity is presently driving it.

Hiring Bannon was the smartest thing he did; firing him was the dumbest. It’s all starting to read like a Hollywood movie, which starts with Trump having a tantrum when he sees that Time has put Bannon on its cover, alluding to him being the most powerful man in America.

Which brings us neatly to the movies, which is Trump’s ultimate nightmare now.

The Wolff book Fire and Fury will surely be before the big studios now, who will be thinking what a blockbuster movie it would make about Trump’s ‘chaos’ and ‘back stabbing’ in the White House as this “narcissist” chomps on Macdonald’s burgers, while his colleagues collectively question his contingent intelligence or failing wits to even recognise old friends, let alone run a super power.

When it comes to red buttons, Trump is about to fall on the one with a huge B on it: Bannon. He might as well fall onto a landmine as we are witnessing the initial stages of self destruction via the mainstream media which he so rapaciously despises.

Bannon is the most dangerous man in the room. He has nothing to lose and only everything to gain as, scorned by Trump after Bannon gave him the world, now red in tooth and claw he will guide his erstwhile boss towards the media abyss. 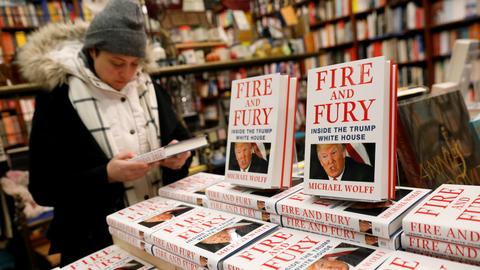 Wolff is 'in every way comfortable' with Trump book