The reported agreement to nominate billionaire businessman and former finance minister Mohammad Safadi as the new prime minister will not be accepted by the protest movement.

Media reports emerged late on Thursday night of a meeting between former prime minister and head of the Sunni Future Movement Saad Hariri, caretaker Finance Minister Ali Hassan Khalil of the Shiite Amal movement and Hussein al Khalil, from Hezbollah, to try and find a solution to the impediments to forming a new government in Lebanon.

Representatives of these three major Lebanese political parties reportedly agreed to nominate billionaire businessman and former finance minister, Mohammad Safadi, to be the next prime minister, a post which must be held by a member of Lebanon’s Sunni Muslim community.

His nomination was also reportedly agreed to by the Free Patriotic Movement (FPM), currently the largest party in parliament led by caretaker Foreign Minister Gebran Bassil and founded by Lebanese President Michel Aoun.

If the candidacy of Safadi moves forward, he will face innumerable challenges, not least of which would be the formation of a new cabinet that would include both technocratic and political elements.

In many ways, his nomination represents a logical step, first, towards resolving Lebanon’s deepening political crisis, and, second, towards tackling the deep economic issues facing the country.

As a prominent businessman and former finance minister, he would likely have the support Lebanon’s Western patrons, notably France and the United States. As a Sunni politician from the northern city of Tripoli, it could be claimed that Lebanon’s long-neglected second city would receive the recognition and representation it deserves.

Safadi’s business and political ties indicate his closeness to both Western and Gulf interests, and, according to a 2009 US Embassy communique released by WikiLeaks, Safadi was described as being close to the Saudi royal family.

If appointed as PM, he would likely be able to provide the necessary cover to protect the state from US sanctions that would inevitably hit should the FPM and its Hezbollah and Amal movement allies attempt to form a government without buy-in from Hariri’s Future Movement.

In any other circumstance, Safadi’s nomination would satisfy most, if not all, of the political calculations required to form a government in Lebanon. However, it seems that what the political class has failed to fully recognise is that the days of ‘normal’ political circumstances in Lebanon are quickly fading.

Since the end of the 1975-1990 civil war, Lebanon has seen a number of protest movements emerge, some succeeding, while others have faded away. One recalls the 2005 ‘Cedar Revolution’ that exploded following the assassination of Prime Minister Rafik Hariri, leading to the withdrawal of Syrian forces from the country.

Although those protests attracted hundreds of thousands to the streets, it nonetheless continues to represent a moment of deep political divisiveness in the country, one that Lebanon has dealt with ever since, as witnessed by the staying power of the opposing March 14 and March 8 alliance movements.

More recently, the 2015 ‘You Stink’ movement that emerged in response to the country’s mounting garbage and environmental crisis mobilised thousands against the rampant corruption of the ruling class in a similar vein to what we are witnessing today.

For a variety of reasons, these protests lost their momentum and faded away. However, they did succeed in establishing a more visible presence for the nascent civil society movement in the country.

The month-long protest the country is witnessing today, however, is in many ways remarkable and unprecedented in Lebanon’s history. Not only has it been widespread geographically speaking, but it has also crossed sectarian boundaries in ways previous protest movements have not. It has maintained its momentum in the face of violent attacks from thugs dispatched by opposing political entities and attracted large numbers of students.

It has witnessed the emergence of female leaders, and has attracted large numbers of dedicated activists from beyond the civil-society movement, penetrating areas and demographics that were hitherto the purview of traditional political movements.

Despite increasing pressure from the political class, particularly from the president and his allies, and from Hezbollah, as well as ongoing attempts to co-opt the protests by political actors seeking to leverage the unrest to improve their political standing, the movement has, by all accounts, stayed the course and adapted to what remains a fluid situation.

While many positions have been articulated from the protest camp, one thread has been consistent: ‘kilon yani kilon’, a colloquial Lebanese Arabic phrase meaning ‘all of them means all of them’, in reference to the entire political class.

It is in this context that the nomination of Safadi will be rejected by protestors. Not only do he and his family come from the very political class they seek to overturn (his wife was a junior minister in the previous Hariri-led cabinet), his nomination is designed primarily to appeal to the calculations of established political parties including Hezbollah, the FPM and Amal – who have all rejected calls for the formation of a purely technocratic cabinet - and Hariri’s Future Movement by facilitating a relatively low-risk means of maintaining their current political position.

On the one hand, the formation of a mixed cabinet of technocrats and political appointees favoured by the FPM and its allies is perfectly logical according to their political calculations, as any purely technocratic government would risk a decline in their leverage of state institutions.
On the other hand, the fact that even a mixed ‘techno-political’ cabinet is being considered is a testament to the pressure the protests have been able to exert thus far. However, the movement has so far been uncompromising in its demands regarding the involvement of politicians it sees as being corrupted and beholden to sectarian interests.

There should, however, be no illusion that the sectarian system is going anywhere anytime soon. As Bassel Salloukh, a professor of political science at the Lebanese American University recently wrote, despite both the material and ideological achievements of the protests thus far: “This does not mean that those sectarian communities laboriously assembled by the ideological, material, and institutional practices of the sectarian system will wither away anytime soon...”

In fact, it could be argued that Lebanon is entering a much more significant, and potentially dangerous, phase as the established political movements seem to be increasing their own mobilisation, not only in an attempt to either co-opt or counter the protest movement, but also to counter each other.

At the same time, the dynamics introduced by the protest movement have the potential, if nurtured correctly, to lead to a new political awakening, particularly amongst the young.

Regardless of what happens moving forward, it would appear as though this dynamic is here to stay, and this is precisely why Safadi’s nomination will undoubtedly be rejected by the street.

The nomination of Safadi and the meeting that reportedly led to this decision is, among other things, as clear an indication that there can be that the political class in Lebanon has failed to grasp the extent to which the political dynamics in the country have permanently changed, whatever the outcome may be in the end. 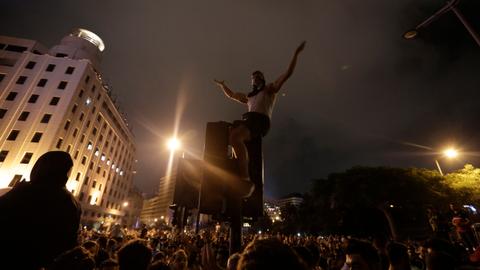 Anger on the streets in Lebanon spells bad news for Hezbollah