If Tariq Ramadan can not get due process, then there is no hope for other Muslims living in France.

The case of Professor Tariq Ramadan, who faces rape charges in France, ceased to be a normal case several months ago. The dire treatment of Ramadan has led to an outpouring of support for the accused.

Whether it’s because of the lack of due process, the absence of an impartial judicial framework, the skewed media coverage led by the same French media and cultural ‘icons’ who spearheaded smear campaigns against Ramadan over the past two decades, and above all the inhumane treatment – there is every reason to believe now that the case against Ramadan is politically motivated.

From the outset, a string of judicial irregularities occurred including: the complete isolation of Ramadan during the first 45 days of detention without even granting him access to family members; denying him access to his own court records; denying him the right of a presumption of innocence; the court's failure to provide him with appropriate medical treatment as he suffers from multiple-sclerosis according to several medical reports, including that of the prison’s chief-doctor, and the judges’ refusal to question the credibility of the plaintiffs’ shaky version of events.

The first plaintiff‘s case (Henda Ayari) is a flagrant example since she changed her version of the alleged events twice and failed to provide an exact date and place of the alleged rape. In the second case, the plaintiff Paule-Emma A. (designated as Christelle) hasn’t been able to prove any of her allegations against Tariq Ramadan. As for the third case, Mounia Rabbouj, the court dropped the charges against Ramadan after the plaintiff failed to provide credible evidence.

To make matters worse, the French court continues to dismiss all requests for bail submitted by Ramadan's lawyer, under the pretext that he could either flee abroad or put pressure on plaintiffs and witnesses.

These factors cast serious doubt on the credibility of the investigation and the impartiality of the judges in charge of the case.

This begs the question, if this is not an attempt of political assassination conducted by the French intelligentsia, judiciary and the state against Ramadan, what could it be then?

Another equally important question is: why Tariq Ramadan? And who stands to benefit from keeping him in detention and thus silencing him?

Ramadan represents a school of intellectual thought that challenges and dismantles the anti-Islam discourse propagated by the Islamophobic French elite. One of the key characteristics of Ramadan's doctrine is to encourage French and European Muslims to act as full citizens, to question their governments on socioeconomic policies, to refuse injustice and discrimination, and to demand social equality. He also calls on governments to pursue policies of social equality and adopt anti-discrimination laws.

In his book, “Islamic Ethics: A Very Short Introduction”, Ramadan highlights the need to initiate interfaith and intercultural dialogues with regard to common moral values in order to question the role of religion, the state and economy in dealing with issues surrounding social and economic inequality.

With the exception of a few fine minds like the prominent French sociologist Edgar Morin or the writer Alain Gresh, French media and the intellectual corpus oscillated between ignoring Ramadan, to publicly questioning his role as a Muslim in the public sphere.

Those who benefit from keeping Ramadan in detention

For almost two decades now, a number of French politicians and media pundits have tried to undermine Ramadan's discourse by accusing him of ambiguity, demagoguery, doublespeak and anti-Semitism. They have strived to keep his intellectual contribution to the public debate in France limited to only matters pertaining Islam.

Framed as the ‘Muslim intellectual’ by most French media outlets, the aim being not only to alienate his French audience but also to distort Ramadan’s image and weaken his intellectual credibility and narrative.

Apart from the French far right party (Le Front National), which upholds racist and Islamophobic views, the overwhelming majority of those who systematically oppose Ramadan’s ideas, and who regularly carry out smear campaigns against him whenever he takes a stand for the rights of France’s discriminated Muslim citizens or condemn Israeli crimes against Palestinians, happen to be close to pro-Israel circles in France.

They include figures such as Bernard-Henri Levy, Alain Finkielkraut, Eric Zemmour, Frederic Encel, Gilles Kepel, Jean-Pierre Elkabache and many others. Some, like the journalist Caroline Fourest, who for years has been leading a smear campaign against Ramadan, are directly involved in the case against him. Since the beginning of the affair, she has been actively promoting the plaintiffs’ version of events on media platforms.

Another media pundit who played a key role, among others, in demonising Ramadan is the French-Israeli paparazzi journalist Jean-Claude ElFassi who closely collaborates with the French magazine l’Express. He went so far as to threaten the third plaintiff’s brother in the event he provides to the court exculpatory elements in favour of Tariq Ramadan.

It is worth pointing out here that l’Express is among the most widely circulated publications and is owned by French-Israeli Patrick Drahi, also the owner of a media empire, including the Israeli TV channel “i24”, French newspaper “Liberation”, “RMC” radio and “BFM” TV channel. These outlets have relentlessly been promoting the plaintiffs’ allegations and attacking Ramadan.

Accordingly, keeping Ramadan in detention, and therefore silencing him, is serving the very interests of those who for years struggled to shut him out and discredit his reputation among his audience. The reason being; during countless debates, media encounters and interviews, Ramadan was cleverly able to expose their hypocrisy and double standards towards France’s Muslim citizens and the Palestinian cause.

Therefore, Ramadan’s absence allows them to have a free reign to spew their Islamophobic, racist and anti-Palestinian narratives, since Ramadan is almost the only intellectual who dares questioning and dismantling their lies and propaganda.

However, the way Ramadan’s case has been handled – or rather mishandled- by the French judiciary will likely have serious consequences for the justice system in France. By embracing, or being influenced by, the anti-Ramadan narrative propagated by the anti-Ramadan lobby, French justice risks losing its credibility.

Ramadan’s case proved that the principle of impartiality, intrinsic to any judicial institution, is at stake in France today due to attempts to politicise the justice system or allowing political considerations to override the need to uphold justice.

This might result in a loss of confidence in how the French justice system operates, in the short, medium and long term, especially among French citizens of Muslim faith.

Muslims will no doubt wonder, if justice can be withheld for someone so high profile as Tariq Ramadan, what chance do they have?

Is France aware that the case against Ramadan may result in a serious social crisis as a segment of French society, already facing discrimination, may feel that even the justice team may one day work against them. Many could not help but compare Ramadan’s case with that of the two ministers Darmanin and Hulot, both accused of sexual assault and yet remained in office.

Going forward the serious lack of due process in Ramadan’s case opens the door to a dangerous era in French history. In a so-called free democracy, which France prides itself on, the justice system has began to appear flawed and politicised. The court of well funded media campaigns trumps the court of law. A dangerous precedent with far reaching consequences.

Will France be able to put an end to this farce that has become Ramadan’s case?

The answer to this question depends almost exclusively on the political mindset that runs France today, and that does not seem to be aware of the disastrous long-term social consequences that this affair might leave behind.

Ali Saad is a French sociologist and media critic, focusing on the influence of mass media on society. 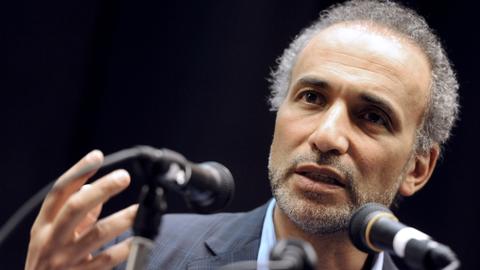