The Palestinian Authority is sabotaging momentum for national liberation

Can Palestinians liberate themselves from a ruling group of politicians that many view as serving Israeli interests?

In recent days, the Palestinian Authority (PA) has made an "unusual" request for Israeli permits to purchase 'riot control' equipment and additional means to disperse demonstrations for the Palestinian security services.

The Palestinian Authority needs to refill its arsenal after it has used it to suppress protests in Ramallah and other West Bank cities that erupted following the killing of the prominent PA critic, Nizar Banat, who was held in its custody.

This equipment will be bought from Israel and funded by foreign donors who are interested in sustaining the PA and ensuring Israel's interests are well-preserved.

Scenes from the crackdown on the latest protests are typically seen when Palestinians are resisting the Israeli occupation.

Thousands of Palestinians were brutalised by Palestinian police forces as well as Fatah loyalists in plainclothes.

They have beaten protestors and fired heavy barrages of tear gas and stun grenades. Dozens were injured, including several journalists, and many were arrested.

Nizar Banat's death and the suppression of protests that followed were a slap in our faces. But, unfortunately, after all our painful sacrifices over the past couple of months, and amid the revival of our liberation spirit and ensuing international solidarity, one of our main obstacles to liberation - namely the PA - struck again.

Nizar's killing and what followed was not an unfortunate act or a "miscalculation". On the contrary, it was a deliberate act of sabotage against the momentum the Palestinian liberation movement was gaining.

On the first day, the PA silenced a leading critic by killing him and the following day, they fired at protestors. The third day, they sent their loyalists to the street to show support for Mahmoud Abbas while beating protesters, harassing female protestors and stealing their phones to post their private conversations and photos publicly.

Journalists, too, were attacked, their phones stolen and many were blocked from documenting the assaults on protesters.

Not only does the PA adopt practices of the Israeli occupation, whether by killing, firing at protesters or weaponising patriarchy, it also helps divert attention from Israel's crimes.

The same day Israeli bulldozers were demolishing a shop in Silwan, a Palestinian neighbourhood in Jerusalem facing ethnic cleansing, Fatah loyalists were busy leading a smear campaign against Palestinian protestors.

These practices also aim to create internal divisions and cleavages that are meant to exhaust and distract us.

Tragically, Banat's case is not the first.

The so-called "security coordination" is a misleading term. It implies that there are two sides exchanging information and making decisions. The reality is that one is at the service of the other.

This paradigm was never about protecting Palestinians from Israel's or its settlers' aggression. It works only in one direction: protecting the oppressor from all types of legitimate resistance of the oppressed.

And for this paradigm to sustain itself, Israel and its allies who fund the PA security sector - including the EU, US and Canada - know they must support the PA at any cost. Palestinian lives? Who cares?

For Palestinians, however, during the recent uprising, the PA proved itself to be more irrelevant than ever.

While Palestinians across historic Palestine came together in a quest for liberation, with Gaza enduring massive bombing, the PA hid in silence, waiting for the wave to pass so it could resume its routine of arrests and torture.

After the aggression on Gaza stopped, PA forces arrested dozens of Palestinians across the occupied West Bank, coinciding with Israel's campaign of mass arrests.

In the wake of Banat's killing, Palestinians are asking: How did we get here? It's a rhetorical question to which we all know the answer: The Oslo Accords created a subcontractor for Israel and the illusion of the possibility for a functioning state under a malicious and brutal occupation.

Corruption and authoritarianism have reigned as the PA transformed its security forces into "new Palestinians", convinced they were serving Palestine while oppressing their people.

Donor funds were designed to keep Palestinians subordinate and dependent. The weakening of the Palestinian Liberation Organizations and the incompetence of those leaders to bring us one inch closer to freedom is also not a coincidence.

We got here because we have been far too late in removing these people from power.

What is needed now is faith in our liberation project in its entirety. This includes liberation from our colonisers and their subcontractors, our internal oppressors.

For the PA, this is a survival battle of a corrupt and defeated elite. For protestors, this is a battle for collective salvation from an authoritarian regime sabotaging our liberation struggle.

Banat's killing has crystallised these realities and, above all, shown that the path to Palestinian liberation from Israeli colonialism must step over the PA's headquarters in Ramallah.

It's painful that Palestinians are being killed, beaten and shot at by other Palestinians when they all live under occupation and colonialism.

It's painful that Banat's five children will have to live with the memory of other Palestinians beating to death their father, who taught them to love Palestine. But it will be more painful if his killing does not begin the end of this shameful era of our history and bring us forward towards liberation in its entirety.

Abir Kopty is a writer and journalist based in Berlin. 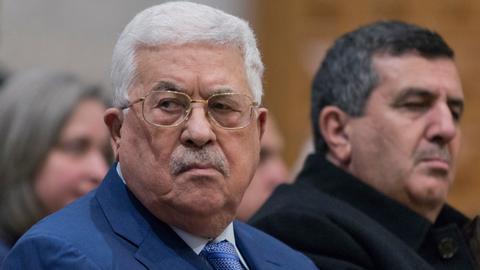 Israel and Hamas agree on one thing: Mahmoud Abbas