1
The pandemic is moderate now but could spiral out of control in Africa
2
What's the truth behind the coronavirus spread in Syria?
3
Khalifa Haftar's recklessness could compound coronavirus threat to Libya
4
How the coronavirus brought back political realism
5
Geopolitical schadenfreude: The US, Iran, China and the pandemic

Saudi Arabia has failed to devise a long-term strategy in the region while decades of Iranian planning now bears fruit.

In the aftermath of the strike against the Saudi Arabian oil processing facility at Abqaiq, no one can be quite sure who exactly pulled the trigger. The Iran-backed Houthi rebels in Yemen have claimed it was their drones. The United States has pointed the finger once again at Iranian involvement firing possible cruise missiles from southern Iraq and ruling out Yemeni involvement. Pompeo later claimed that US information confirms Baghdad's denial that its territory was used for the attack. Commenting on US allegations, Iranian Foreign Minister Javad Zarif said that the US has 'failed at maximum pressure' are now turning to 'maximum deceit'.

What we can be sure about, however, is that Iran is standing in the middle of all this literally laughing as it is, in all likelihood, striking Saudi Arabia indirectly while Riyadh is completely incapable of retaliating in kind in any way, shape or form.

This is, of course, primarily a story about Saudi Arabian impotence.

The kings of Saudi Arabia have historically relied on others to fight their battles and have had little stomach to engage in power projection beyond their own borders.

In the early days of the Arab-Israeli conflict, Saudi leased its Red Sea islands of Tiran and Sanafir to Egypt in a bid to ensure that its territory was not linked to the newly-founded State of Israel and they, therefore, could absolve themselves of Arab expectations that they would join military efforts to fight against Israel.

In the 1980s, Saudi Arabia decided to throw its financial weight behind Saddam Hussein’s Iraq as it fought a bloody eight-year war with revolutionary Iran led by Ayatollah Ruhollah Khomeini.

Saudi royals could not care less about Arab solidarity but were instead petrified of the thought that Khomeini’s revolutionary political Shia Islam would lead to a hostile northern neighbour if Saddam fell, and would inflame passions amongst its own Shia population who inhabit the oil-rich Eastern Province of Saudi.

Those same fears are currently being played out as Iran spreads its influence across the Middle East, rattling Arab regimes like those in Saudi Arabia and Bahrain and by turning Iraq into a compliant proxy state. Apart from Yemen, Bahrain is still one of the few times Saudi Arabia has actually deployed military force to project power.

When Iraq had successfully managed to stop the immediate spread of Khomeinism in 1988, Riyadh then facilitated American expansionism by working with Kuwait and the UAE to undercut Iraqi oil sales, produce oil in excess of OPEC quotas, and setting the stage for Saddam’s foolhardy invasion of Kuwait in 1990 by ensuring that, with a crippled war-time economy, Iraq could never stand its “million-man” army down without risk of massive unrest.

Riyadh then allowed the US military to deploy on its soil and, although it gave token participation in the military efforts to prise Saddam’s grip on Kuwait open, the Saudi military performed without distinction and was almost routed were it not for American protection.

No short-term fixes for long-term problems

However, the contemporary geopolitical scene in the Middle East is one of US retrenchment and limited but ever-increasing disengagement. This has lead to a chaotic regional power vacuum that no one has been able to fill, not even a resurgent Russia despite its determining role in Syria.

Riyadh can no longer simply throw money at a problem and hope it will go away, and their current problem is an ambitious Iran that has spent decades planning its regional ascension.

While Iran lets its proxies loose to wreak havoc with Saudi Arabian interests, Riyadh is scrambling for a way to respond and can find nothing outside of complaining to its Western masters and seek ever-larger arms purchases.

Even global oil production being cut by five percent in the aftermath of the latest strike on Abqaiq failed to stir any meaningful action. US President Donald Trump has suggested in his tweets that if Riyadh wants war against Iran, Washington would support it but it seems that Saudi Arabia would have to lead from the front with American-backing.

Saudi Arabia knows that any direct confrontation with Iran will lead to a calamitous defeat as it does not have the military capability to deal decisive blows to start and end a war quickly, and would face attacks not only from Iran but from its proxies in Iraq, Lebanon and Yemen, attacks it has no effective proxies of its own with which to counter with.

Saudi Arabia is encircled, its pampered population has no stomach or experience of war that affects the home front for an extended period of time, and there is absolutely nothing Riyadh can do about it short of praying for Uncle Sam to step in.

Had Riyadh invested in developing capacity and capability in groups that could balance against Iranian proxies in pivotally important countries such as Iraq, it would be able to directly challenge Tehran’s power. However, Saudi neglected to do this in favour of hanging onto American coattails and is now paying the price of short-sighted massive spending and attempting to curry favour with those who are already in Iran’s pocket such as Iraqi Shia cleric Moqtada al Sadr.

It is astounding that, for an absolute monarchy, Saudi Arabia has almost no long-term strategic planning. It is not as though Saudi officials need to worry about planning for elections every four or five years, so it is inexcusable that they are unable to muster up a decades-long strategy that will stabilise its borders and secure its interests both at home and abroad.

Whatever one may think about Iran and its expansionist agenda that has had destructive consequences for Iraqis, Syrians, Lebanese and Yemenis, from a realpolitik perspective they must be praised. While its opponents lay at the mercy of powerful foreign backers, Tehran builds alliances with ascendant powers like Russia and China, but independently plots and plans and works hard to achieve its regional ambitions.

Iran has spent decades nurturing its proxies and has gradually extended its economic, cultural and military influence. Its strategy has borne fruit as it can now threaten retaliation against all its Arab rivals and the United States while it projects influence in major Arab capitals, including Damascus and Baghdad.

Rather than simply express hatred towards the Iranian regime, its Arab rivals could do worse than to show them some respect and learn a thing or two from them for their own sakes.

What's the truth behind the coronavirus spread in Syria? 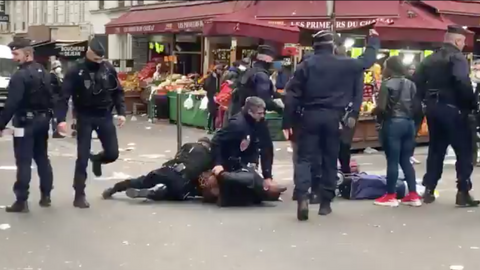 Coronavirus lockdown in France leads to the brutalisation of minorities

1
The pandemic is moderate now but could spiral out of control in Africa
2
What's the truth behind the coronavirus spread in Syria?
3
Khalifa Haftar's recklessness could compound coronavirus threat to Libya
4
How the coronavirus brought back political realism
5
Geopolitical schadenfreude: The US, Iran, China and the pandemic