Novak Djokovic has comfortably reached the last 16 at Wimbledon while Maria Sakkari has become the sixth top-10 women's seed to crash out in the first week.

"So far, so good," said the 35-year-old top seed after beating a player who described him as his "idol". It was the 330th win of Djokovic's Grand Slam career.

"Before the tournament started, it was a dream for me to play Djokovic," said Van Rijthoven, only the seventh man since 2000 to reach the round of 16 on his Grand Slam debut.

Maria, in the fourth round of a Slam for the first time, will face former French Open champion Jelena Ostapenko for a place in the quarter-finals.

"It feels amazing, first time in the last 16, so that's amazing. To win against Sakkari today, it's pretty awesome," said mother-of-two Maria.

The 37-year-old American started his match against the 10th seed four aces behind Croatia's Ivo Karlovic, who has served 13,728. Isner broke the record in the third game with his fifth ace.

Isner, who stands six feet 10 inches (208 centimetres) tall, is also in the record books for taking part in the longest match in history in 2010, against Nicolas Mahut.

A plaque was unveiled outside Court 18 at Wimbledon to commemorate that contest, which lasted 11 hours and five minutes.

"Give him another plaque," US tennis great John McEnroe said on ESPN. 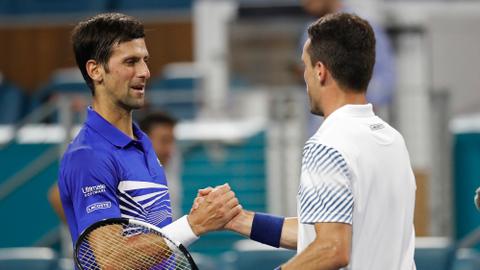