Formula One adds Turkey to 2020 calendar, leaves out China

Turkey's Istanbul Park circuit will host a race on November 15 ahead of a Bahrain double in late November and early December, the sporting body has said.

Formula One has added four more races to this year's calendar, with Turkey back on for the first time since 2011.

Races in Turkey, Abu Dhabi and two in Bahrain will take place in November and December, completing the heavily reshaped calendar and marking the latest finish to an F1 season since 1963.

The sporting body said on Tuesday “a limited number of fans” will be able to attend some of the remaining events in the pandemic-disrupted season as it confirmed the Chinese Grand Prix has been cancelled due to the Covid-19.

Turkey's Istanbul Park circuit would host a race on November 13-15 before a Bahrain double in late November and early December and Abu Dhabi ending the season on December 13 at Yas Marina.

BREAKING: The Turkish Grand Prix is back!

F1 will also be making two trips to Bahrain, before heading to Abu Dhabi in mid-December. #F1 pic.twitter.com/gmMjcWGiSg

Russian Grand Prix organisers are already selling tickets for their race in Sochi in September.

All six Grand Prix held so far since the delayed season started in Austria in July have been held behind closed doors. Formula One did not specify which races would be open to spectators.

Formula One confirmed only 13 races until Tuesday, all of them in Europe after those in the Americas were cancelled, but teams and drivers now have a clear idea of how many the championship will have.

The original schedule, published before the pandemic, envisaged a record 22 races, but fixtures such as Monaco had to be cancelled and a new calendar drawn up with a mix of old favourites and new venues.

It's nine years since we last headed to Turkey! ❤️🤍 @F1 has changed a 𝘁𝗶𝗻𝘆 bit since then... 😜 pic.twitter.com/rBUvres3G3

China's race in Shanghai had looked doubtful for some time due to the virus.

The first Vietnamese Grand Prix, postponed from April, will not be happening either although its cancellation has yet to be confirmed officially.

"Sadly, we will not be racing in China this season," Formula One said, adding that it looked forward to returning next year.

Turkey will be the only race on this year's calendar that could be considered a non-European or Middle Eastern round, since the circuit is on the Asian side of Istanbul.

Japan, Singapore, Azerbaijan and Australia have already been cancelled.

Istanbul's circuit is popular with drivers; the only current drivers to have won there are Kimi Raikkonen, six times world champion Lewis Hamilton and four times champion Sebastian Vettel.

"It's an old-school circuit, something I was watching on TV when I was younger. (That) massive left-hander, flat-out, is going to be pretty impressive," Renault's Esteban Ocon told reporters recently.

Bahrain's two races on November 29 and Dec. 6 will be designated the Bahrain Grand Prix and the Sakhir Grand Prix, after the name of the desert circuit.

Sakhir will be the third circuit to host two races this season after Austria's Red Bull Ring and Britain's Silverstone.

The Belgian Grand Prix at Spa-Francorchamps this weekend will be the seventh race of a season that is being packed into five-and-a-half months. 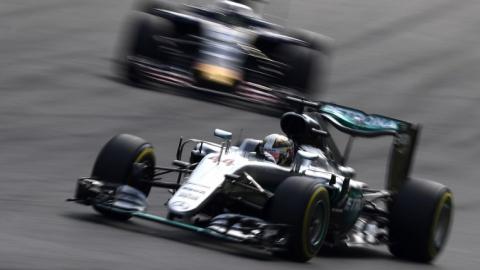 Formula One set to be sold for $8.5 billion