The Golden State Warriors beat the Celtics 103-90 in Game Six of the NBA Finals in Boston on Thursday to win the Championship trophy for their fourth time in eight seasons.

Stephen Curry led the way for the visitors with 34 points, seven assists and seven rebounds to claim his fourth title.

“I’m so proud of our group," an emotional Curry said after the win, adding, "... at the beginning of the season nobody thought we would be here except everybody on this court".

The triumph is a remarkable turnaround for the Warriors, who missed the playoffs in the past two seasons amid a torrent of injuries before defeating the Nuggets, Grizzlies, Mavericks and Celtics this year to claim the Larry O'Brien trophy.

"We were so far away from it," Curry said.

"We hit rock bottom with injuries and the long road of work ahead and trying to fill in the right pieces and the right guys. You can’t ever take this for granted because you never know when you’re going to get back here."

It is the seventh title overall for the franchise, which was founded in Philadelphia in 1946 as one of the original members of the Basketball Association of America.

The Warriors also captured the league’s first championship in the ’46-47 season.

Stephen Curry is the 2021-22 recipient of the Bill Russell Trophy awarded to the #NBAFinals MVP! pic.twitter.com/dNE9V7glu9

Stephen Curry was named Most Valuable Player of the NBA Finals after leading the Warriors to a 4-2 triumph over the Boston Celtics in the championship series.

Curry, a two-time regular-season MVP, claimed the award for the first time in his seventh Finals appearance that finished with his fourth crown after wins with the Warriors in 2015, 2017 and 2018.

The win completed a dramatic journey back to the pinnacle of the NBA for the Warriors, who just two seasons ago had the worst record in the league as the franchise battled injuries and the departure of key personnel.

"At the beginning of the season nobody thought we'd be here - except everybody on this court right now. It's surreal," Curry said.

"We were so far away from it.

We hit rock bottom with injuries and the long road of work ahead, trying to fill in the right pieces with the right guys.

"You never take this for granted because you never know when you'll be back here."

Delighted Warriors coach Steve Kerr admitted the team's fourth championship of his reign had been the most unexpected. 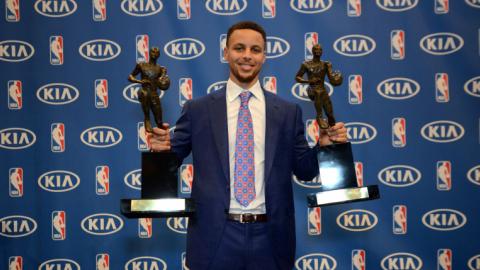