Crowd trouble marred Hamburg's 2-1 home victory over Borussia Moenchengladbach, which came too late to save the club from relegation.

Former European champions Hamburg SV were relegated for the first time on Saturday, with their fans throwing flares onto the pitch as their team's record uninterrupted top-flight run since the Bundesliga began in 1963 came to a controversial end.

VfL Wolfsburg's 4-1 win over bottom club Cologne meant Hamburg's 2-1 home victory over Borussia Moenchengladbach, which was interrupted for 15 minutes due to the crowd trouble in stoppage time, was rendered meaningless.

Hamburg will join Cologne in the second division next season, while Wolfsburg go into a relegation playoff.

Dozens of riot police, several on horses, charged onto the pitch and lined up in front of the Hamburg fans, who lit several flares and threw them behind the Gladbach goal when it became clear that the team was on its way to the second division.

Hamburg were leading 2-1 in stoppage time when referee Felix Brych stopped the game.

The fires were put out and police gradually left the field so the game could resume and the final seconds be played out.

Hamburg had taken an early lead through Aaron Hunt and went in front again with a Lewis Holtby goal just past the hour after Gladbach had levelled the score before halftime.

Even when Hamburg went down to 10 men after the dismissal of Bobby Wood in the 71st minute, they kept battling, hoping for a miracle but events at Wolfsburg ensured it never came. 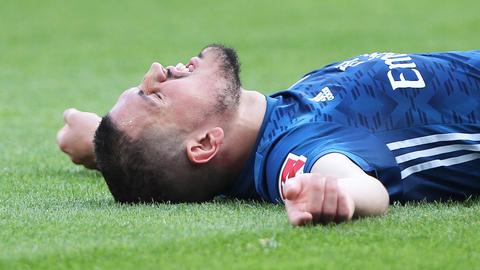