Lewis Hamilton says his top-five slot on the grid for F1 Australian Grand Prix has come despite Mercedes making little to no progress with its car.

Lewis Hamilton said his Mercedes was driving "like a rattlesnake" but the Briton tamed his car to qualify fifth for the Australian Grand Prix in a much-improved performance.

Charles Leclerc claimed Ferrari’s first pole position at the revamped Albert Park circuit since 2007 with a decisive final lap of 1 minute, 17.868 seconds in Melbourne on Saturday.

But running close behind were the Red Bulls of world champion Max Verstappen, who qualified .286 seconds behind, and Sergio Perez, who posted the third quickest time.

Hamilton, the seven-time world champion, has had a torrid time so far this season as the German manufacturer struggled with porpoising, or bouncing at high speed.

It continues to hinder Hamilton, but fifth was a huge improvement from the 16th he qualified for at the last grand prix in Saudi Arabia.

Only Friday he had complained there had been no improvement since Jeddah, but struck a different tone after his efforts on Saturday in Melbourne.

"I'm really grateful for the work at the factory in turning the car around from yesterday and I almost got P4, which would have been cool, but we'll be fighting for that position tomorrow," he said.

READ MORE: Formula 1 back in Las Vegas after four decades

"I'd say this era of car is the worst for porpoising that I've ever experienced," he added, and that "driving it is a real challenge - it's like a rattlesnake".

"We need to find the right balance in ride height to give us performance while controlling the bouncing tomorrow.

"(Teammate) George (Russell) and I tried slightly different things on our cars today so hopefully that's good learning for the team to take into the race."

Russell will start alongside Hamilton on the grid Sunday in sixth, consolidating a good day for the team.

"When you consider the challenges we are facing at the moment, the team worked very well to extract everything from the car after two difficult practice sessions yesterday," said Mercedes chief Toto Wolff.

"The drivers maximised their opportunities with the car that's under them right now and it's great to see the positive approach they are bringing to each session as we continue learning." 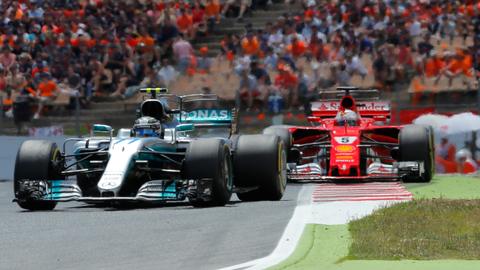