Manny Pacquiao lost his WBO welterweight world title to Jeff Horn in a stunning, unanimous points decision in a Sunday bout billed as the Battle of Brisbane in front of more than 50,000 people.

The 11-time world champion entered the fight at Suncorp Stadium as a hot favourite but got more than he bargained for against the 29-year-old former schoolteacher.

Still, Pacquiao dominated the later rounds and the result could have gone his way.

Pacquiao's long-time trainer Freddie Roach predicted the fight would be short and sweet but Horn, unbeaten in his 17 previous professional fights, applied pressure by winning some of the early rounds and Pacquiao needed treatment during the 6th and 7th rounds for a cut on the top of his head that resulted from a clash of heads.

Roach had said earlier in the week that he'd think about advising Pacquioa to retire if he lost the fight, but that would depend on how he fought.

Pacquiao's camp had talked about a rematch with Mayweather if he got past Horn, hoping to avenge his loss on points in the 2015 mega fight. That seems to be a distant chance now.

Pacquiao, who entered the fight with a record of 59-6-2, 38 knockouts, was defending the WBO title he won on points against Jessie Vargas last November. 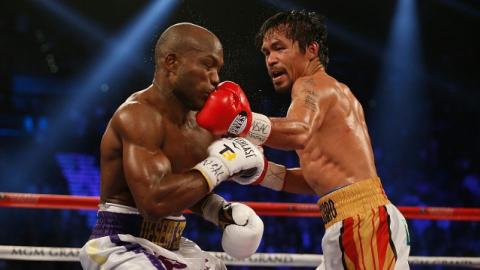