1
Live blog: Zelenskyy presses Europe for heavy arms 'as soon as possible'
2
NBA Roundup: Bucks get triple-double from Giannis to topple Heat
3
Miraculous escape for Norwegian footballer who survives Türkiye quakes
4
After massive protests against pension reforms in France, what lies ahead?

German Chancellor Angela Merkel, during a visit to the UK, says she is "very much concerned" about spread of the coronavirus when London hosts the semi-finals and finals of the European football championships.

German Chancellor Angela Merkel has raised fears about the potential for close-contact spread of the coronavirus when London hosts the semi-finals and finals of the European football championships.

Wembley Stadium in the British capital is hosting the final matches of the competition, with a reduced capacity of up to 60,000.

But that far exceeds other venues, particularly in Germany, with concern widespread about the transmission of the more virulent Delta strain of the virus.

"We in Germany, as you know, decided to have fewer people attend games in the Munich stadium," Merkel told a joint press conference with Prime Minister Boris Johnson on her farewell visit to Britain on Friday.

"The British government, obviously, will take its own decision. But I'm very much concerned whether it's not a bit too much."

Scottish health authorities on Thursday said nearly 2,000 Covid cases in the country since June 11 were linked to fans watching the Euros.

Two-thirds — well over 1,000 — were a result of fans travelling to London to watch Scotland play England in the tournament's group stage.

Merkel met Johnson at his Chequers country retreat northwest of London, on her 22nd and final visit to Britain as chancellor before stepping down after elections in September.

The two leaders swapped a good-natured exchange after England knocked Germany out of the European tournament, with Merkel wishing the English team success in the remainder.

It was a pleasure to welcome Chancellor Angela Merkel to Chequers this afternoon.

The new joint ventures we have agreed today will leave a legacy that will last for generations.

She indicated a potential softening in Germany's stance towards travellers from Britain, after concern that even the vaccinated could face European travel curbs.

Last month, Merkel called for tough restrictions, including longer quarantine, for people travelling from Britain, where the Delta variant has caused a surge in cases.

But she indicated that stance could soften as travel advice is reviewed.

"We think that in the foreseeable future, those who have received double jabs will... be able to travel again, without having to go into quarantine," she said.

Merkel's comment will raise hopes in Britain, where some two-thirds of all adults have now received two Covid vaccine doses but anger is growing at travel restrictions.

Johnson again hailed the country's mass vaccination programme as a success, as he looks to lift all social distancing measures in England from July 19.

He said he was "confident" that travel restrictions from Britain "will not prove to be a problem".

Johnson has clashed repeatedly with Merkel over Brexit, but rolled out the red carpet for her final visit as both countries look to a new chapter following Britain's withdrawal from the European Union.

The visit included her addressing a virtual meeting of the British cabinet. The last leader to do so was US president Bill Clinton in 1997.

"Over the 16 years of Chancellor Merkel's tenure the UK-Germany relationship has been re-energised and re-invigorated for a new era," said Johnson.

The pair held a working lunch, with beef fillet and custard tart on the menu, where they discussed Britain's fractious post-Brexit relationship with the EU.

New trading arrangements for Northern Ireland overshadowed discussions at the recent G7 summit, where European leaders including Merkel urged Johnson to implement what he signed.

Merkel said she was "optimistic" that "pragmatic solutions" could be found on the protocol, which is meant to ensure checks on goods moving from the rest of Britain to the province but has sparked a row over sovereignty.

London and Brussels on Wednesday agreed to extend for three months a grace period on carrying out checks on chilled meats, after threats of reprisals dubbed a "sausage war."

"When it comes to chilled meats, the wurst is behind us," Johnson quipped.

The prime minister hailed Merkel's scientific background, which he said had been vital in the global response to the coronavirus crisis — and her contribution to global diplomacy.

Merkel also met Queen Elizabeth II at Windsor Castle, west of London, weeks after meeting her at the G7 summit in Cornwall.

"I'm delighted to be here," Merkel said as she was introduced to the Queen, who responded "very nice", before pointing out the photographers who had gathered to "take a picture and make history", as the titan of European politics made her British swansong.

Merkel heads to Washington later this month to meet US President Joe Biden. 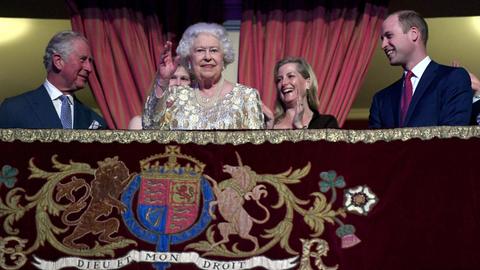 1
Live blog: Zelenskyy presses Europe for heavy arms 'as soon as possible'
2
NBA Roundup: Bucks get triple-double from Giannis to topple Heat
3
Miraculous escape for Norwegian footballer who survives Türkiye quakes
4
After massive protests against pension reforms in France, what lies ahead?