NFL to explore interest from Germany to host games

The NFL has nothing firmly set, but potentially could stage regular-season contests in such venues as Berlin's Olympiastadion, Allianz Arena in Munich or Signal Iduna Park in Dortmund.

The NFL will soon begin exploring interest from German cities in playing host to games in future years, according to reports on the NFL's website and television network.

The reports said the NFL has nothing firmly set, but potentially could stage regular-season contests in such venues as Berlin's Olympiastadion, Allianz Arena in Munich or Signal Iduna Park in Dortmund.

Germany was targeted for fan growth by the NFL, with NBC saying 2.2 million people in the nation watched some of this year's Super Bowl.

The NFL will be gauging interest soon from German cities to possibly host games in future years, I'm told. Nothing set yet. But the NFL has seen great growth in Europe with its UK series, which resumes with two games in London this fall, and Germany could be next.

The NFL scrapped playing international games in 2020 due to the Covid-19 pandemic after playing at least once a year in London since 2007 and three of the past four years at Mexico City.

Two league games are planned for 2021 in London, both at Tottenham Hotspur Stadium, with the New York Jets facing the Atlanta Falcons on October 10 and the Jacksonville Jaguars playing the Miami Dolphins a week later.

The NFL played four games in London in 2019, two at Wembley Stadium and two at Tottenham. 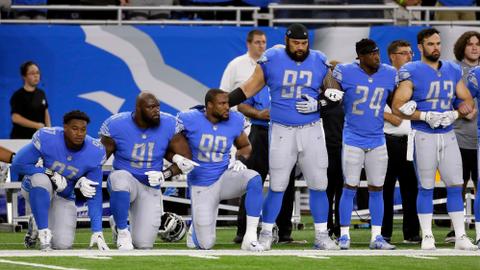 Take a knee: standing up for social justice