Defending champions Spain opened their Euro 2016 campaign with a comfortable 1-0 win over Czech Republic but it was the Italian side which impressed the most in Monday's triple header.

Italy, looking to banish the demons of a first round exit at the 2014 World Cup, were clinical in their 2-0 win over the much-fancied Belgium side, a display highlighted by a stunning Graziano Pelle volley in the dying minutes of the clash.

Belgium, the highest ranked side in Europe, dominated for long spells but the Italians always found to stop their surge and were ruthless in their counter in the Group E clash in Lyon.

Emanuele Giaccherini's strike just after the half hour put Antonio Conte's Italian side in front before Southampton striker Pelle sealed the win with a thumping finish from Antonio Candreva's cross.

Belgium now face a crucial clash with Ireland on Saturday in Bordeaux and must register a win if they are to avoid an embarrassing early exit.

"The defence was fantastic, I think we have the best back line in the competition, they made the difference," said goalscorer Giaccherini.

Pique to the rescue

In Toulouse, Gerad Pique, a target of abuse from Spain fans this season due to unflattering comments about Barca's rivals Real Madrid, was the unlikely hero as the defending champs overcame Czech Republic.

"It is very important to start well," said Pique.

"We played well, controlled the game, created chances, but the ball didn't want to go in. In the end I had the luck to score the goal."

Spain's build-up to the tournament was rocked by reports last week claiming goalkeeper David de Gea had been involved in a sex scandal.

But coach Vicente del Bosque kept faith in the Manchester United shot-stopper by handing him the gloves ahead of the legendary Iker Casillas.

Cech's resistence was finally broken in uncharacteristic fashion when Pique was on hand to turn home Iniesta's inch-perfect cross at the back post.

However, there was still time for De Gea to justify his inclusion as he parried Vladimir Darida's thunderous volley to safety.

Ireland and Sweden remain in the fight to make the last 16 after Ciaran Clark's own goal cancelled out Wes Hoolahan's brilliant finish for the Irish in Paris.

Hoolahan met Seamus Coleman's flighted ball with a controlled first-time strike three minutes into the second-half at the Stade de France to give Ireland a lead they fully deserved.

However, having been kept quiet for long spells by the Irish defence, Sweden captain Zlatan Ibrahimovic created the equaliser in the 71st minute when his cutback was turned into his own net by Aston Villa defender Clark.

"Of course the goal deflates you and there is disappointment in the dressing room, but I don't think the players should be downhearted with their performance," said Ireland manager Martin O'Neill.

"I think they should be absolutely thrilled with the way we played."

By contrast, Sweden boss Erik Hamren admitted his side need to improve drastically if they are to reach the knockout stages.

"Even though we managed to come back and equalise, I am disappointed. We will need to play at 300 percent to get through," he said. 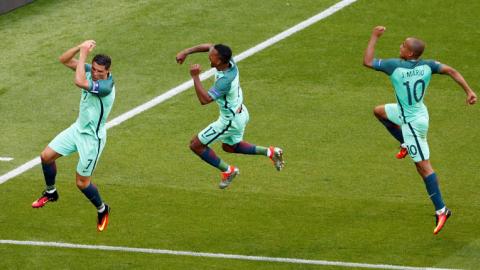 Ronaldo on song as Portugal, Iceland advance to last 16