The decision was announced after examining evidence of state-sponsored doping over several years that reached a high point at the Winter Olympics hosted in Sochi, Russia in 2014.

Russia has been banned from the 2018 Pyeongchang Winter Olympics after evidence emerged of widespread doping — but some of its athletes will be allowed to compete under the tag of "Olympic Athlete of Russia", the IOC said on Tuesday.

The International Olympic Committee also decided to suspend Russian Olympic Committee (ROC) president Alexander Zhukov as an IOC member given that his membership is linked to his position as chief of the ROC who have been suspended from the Games.

The IOC told a news conference that the Schmid report confirmed "the systematic manipulation of the anti-doping rules and system in Russia."

Samuel Schmid, the author of the report, told journalists, "The results are not based only on (whistleblower) Grigoory Rodchenkov's testimony. There is scientific evidence, witness statements documents and correspondence.

"The facts are that in Russia there was systemic manipulation of doping and the anti-doping system ... that also took place at Sochi 2014 (Winter Olympics)."

The IOC's decision comes 18 months after it had refused an outright ban of Russian athletes at the 2016 Rio de Janeiro Olympics and told international sports federations to decide individually on the participation of Russians in Brazil.

While all the track and field athletes bar one and the entire weightlifting team were banned from Rio, around 70 percent of Russia's original 387-strong squad ended up taking part at those Games.

Tuesday's decision, however, looks to have taken into account growing vocal protests from other countries, major national anti-doping agencies and individual athletes who felt they had been robbed by their Russian opponents for years and had demanded a full suspension of Russia.

The head of Russia's Olympic Committee, Alexander Zhukov, told the IOC on Tuesday that punishing clean athletes was "unjust and immoral", with the move to ban Russia from the Winter Games sparking outrage in the country

"Punishing the innocent is unjust and immoral. This completely contradicts the basic Olympic principles," he told the International Olympic Committee in Lausanne before the decision to ban Russia from the 2018 Olympic Games was announced.

"Everyone should answer for his sins."

Speaking to reporters, Zhukov did not immediately say whether Russia would take part in the games.

"We will have to discuss this decision," he said.

Officials are expected to address the issue on December 12.

The Kremlin did not release an immediate reaction.

But all eyes will be on President Vladimir Putin on Wednesday when he is scheduled to speak to his supporters during a planned event.

Putin said in October that both a blanket ban and allowing Russia to compete under a neutral flag would be "humiliation for the country."

The IOC decision sparked outrage in Russia, with many saying the country was humiliated and others suggesting to boycott the games.

"They are humiliating the whole of Russia through the absence of its flag and anthem," he said in televised remarks.

Russian foreign ministry spokeswoman Maria Zakharova said she was with the country's athletes in spirit.

"Does it hurt? Very much," she said on Facebook.

President of the Russian Bobsleigh Federation Alexander Zubkov described the decision to ban Russia as "a punch in the stomach."

Lawmaker Irina Rodnina, who is a Soviet figure skating legend, apologised for not being able to protect Russian athletes. "How they are afraid of us," Rodnina tweeted. "Sorry guys."

"This is simply the murder of our national sport," Tarasova said in an interview.

Nations have in the past been barred from taking part in the Olympics, notably South Africa during the apartheid years, but none has ever been handed a blanket ban over doping. Russian athletes, however, would be able to take part in the Games, the IOC said, as independent competitors "under the Olympic flag."

Moscow could refuse the offer and boycott the games.

Russian President Vladimir Putin has previously said it would be humiliating for Russia to compete without national symbols.

The IOC also imposed a fine of $15 million on the Russian Olympic committee.

Mutko, who was sports minister at the time of the 2014 Sochi Olympics, remains head of the 2018 World Cup organising committee.

Schmid says the doping programme "was under the authority of the Russian sports ministry. That is why the then sports minister has responsibility for the failure of this system."

There was no immediate comment from FIFA on Mukto's continuing role as head of the Russian soccer federation and the World Cup organising committee.

Olympic bronze medalist Matt Antoine says he was "truly in shock" when he heard the IOC ruling that will bar Russia from Pyeongchang and allow clean Russian athletes to compete under the Olympic flag.

"It is without a doubt the correct decision and the only option that allows for athletes, nations, and fans to continue to believe in the Olympic movement," Antoine said.

Antoine says the decision was bold, and that athletes are celebrating the IOC's stance.

"Dedicated athletes around the world thank you," Antoine said. 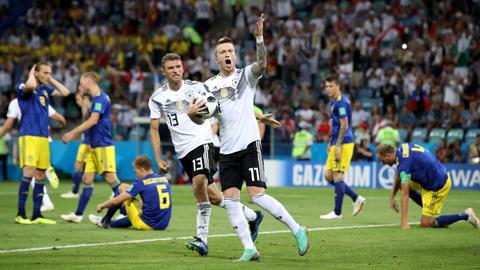