Red Bull's Max Verstappen claimed a record 14th victory of the Formula One season by winning the Mexico Grand Prix on Sunday.

It was the second win inside a week for Dutchman Verstappen, who also triumped at the United States Grand Prix in Austin, Texas.

Verstappen has now beaten the record previously held by Michael Schumacher and Sebastian Vettel for the most wins in a single season.

"It has been an incredible year so far, we are definitely enjoying it and we'll try to go for more (victories)," said Verstappen.

Hamilton lamented his team's decision to choose medium and then hard tyre compounds while Verstappen went from softs to medium.

"I was close in the first stint, but the Red Bulls were too fast today and they probably had the right tyre strategy," Hamilton said.

After lap one, the Dutchman held a lead of 1.39 seconds which he gently extended to 1.6 by lap 10 and 2.2 by lap 20 as the leaders ran in consistent formation, the race only punctuated by Stroll taking the first pit stop on lap 18.

Verstappen reported his soft tyres were deteriorating shortly before Perez came in after 23 laps to switch from soft to medium compounds, but his stop was hampered by a sticky rear wheel change and took five seconds. He re-joined sixth.

Two laps later, Verstappen came in and out in 2.5 seconds, passing the lead to Hamilton, who was 5.5 seconds clear of Russell as the Dutchman rejoined third behind him.

Hamilton came in on lap 30 to switch to hards and rejoined third, with Russell taking over as leader until lap 35, when he also pitted to take hard tyres. He came back in fourth and the leading group were back as they had been.

"This tyre is not as good as the medium," Hamilton said on team radio, prompting Mercedes to reply suggesting it would last longer than the medium, as taken by Red Bull.

Hamilton, however, was struggling for grip and impatient as he slipped 9.5 seconds adrift of the champion with Perez, third and pressing, only 1.9 seconds behind.

By lap 40, both Mercedes men were grumbling in unison about the hard tyre's lack of performance.

Verstappen extended his lead to more than 10 seconds by lap 50, but Hamilton clung on.

"Are we on the wrong tyre?" Hamilton asked his team. "No, Lewis, we think we're on the right tyre and it'll get to the end. No sweat," replied his race engineer, Pete Bonnington.

With six laps to go, Mercedes' hard tyre gamble appeared to have failed when two-time champion Fernando Alonso pulled off at turn one in his Alpine.

It was a brief pause without any pitstops, leaving Russell frustrated in his requests for new rubber.

"Stay out," said Mercedes, only relenting on lap 70 to give him a chance to go for fastest lap 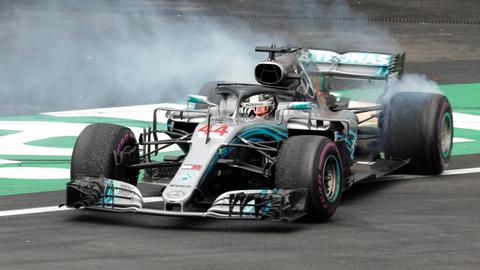