Iraqi police said Mazlum Dag, born in Turkey's Diyarbakir, is one of the assailants who carried out a shooting at a restaurant, killing three people, including a Turkish diplomat.

Iraq's Kurdish Regional Government (KRG) said on Thursday it had identified one of the gunmen who opened fire on an upscale restaurant in the city of Erbil, killing a Turkish diplomat.

Police shared a photo of the attacker, Mazlum Dag, who was born in Diyarbakir, Turkey in 1992, and asked locals to help turn him in.

Turkish authorities identified him as an older brother of Dersim Dag, a member of the Turkish Parliament from HDP.

Mazlum Dag has two other brothers, both of whom are wanted by Turkish authorities for being members of PKK.

In PKK's 30-year terror campaign against the Turkish state, more than 40,000 people, including women and children, have been killed.

The diplomat, who was serving at Turkey's consulate in Erbil, KRG's capital, was killed in the attack on Wednesday.

He said that apart from the diplomat, the assailants also fired on two Iraqi nationals sitting at the next table, killing both.

No group has claimed responsibility for the attack.

Cavusoglu said Turkey was in contact with Baghdad and Erbil regarding the incident and efforts were continuing to capture the attackers and discover the motive behind the attack. 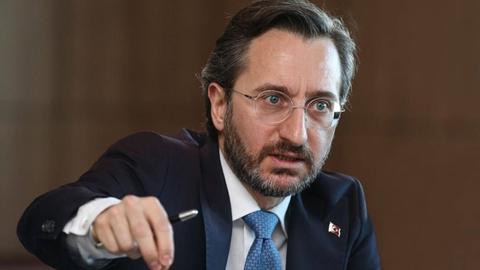