The meeting came just one week after Erdogan announced that five automotive supplier firms - Anadolu Group, BMC, Kiraca Holding, Turkcell, and Zorlu Holding - will jointly manufacture Turkey's first car, adding that he expects the car’s prototype will be ready in 2019, with sales to follow in 2021.

Erdogan had also shown a willingness to lean towards the production of hybrid cars, something electric car giant Tesla and its boss Musk know a thing or two about.

Musk has been calling for a transition from fossil fuels to sustainable energies for years and found common ground with Erdogan's plan to make Turkey more self-reliant and efficient in all sectors by 2023.

Presidential spokesman Ibrahim Kalin said Musk and Erdogan also discussed environmental issues and solar power generation and potential joint operations between Tesla, Musk’s SpaceX company and Turkish firms, as well as the launch of Turkey’s Turksat 5A and 5B satellites.

“We also exchanged views on what sort of joint operations Turkish firms could have with the SpaceX and Tesla companies,” Kalin was quoted as saying by Anadolu Agency.

Turkey aims to launch the Turksat 5A satellite in 2020 and the 5B in 2021. In October, Airbus submitted the best bid in a tender to build the Turkish satellites.

Kalin said an agreement would be signed with Airbus on Thursday, and Musk would also be present at the meeting as a subcontractor.

Musk’s SpaceX plans its first trip to Mars in 2022, carrying only cargo, to be followed by a manned mission in 2024.

Musk is in Turkey to attend the Global SatShow in Istanbul.

TRT World's Hasan Abdullah has more on the meeting from Ankara. 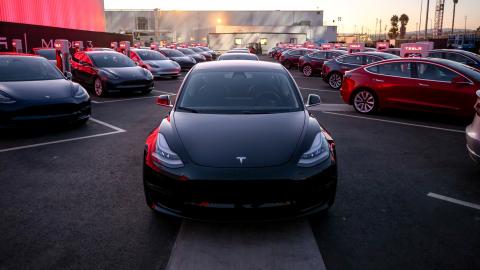