The Turkish president's remarks come after Turkey's Defence Minister Hulusi Akar was quoted saying that joint training of US and Turkish soldiers for patrols in Manbij had begun.

The deal between Turkey and the United States regarding the northern Syrian town of Manbij is delayed "but not completely dead", President Recep Tayyip Erdogan was quoted as saying by Hurriyet newspaper on Thursday.

Turkey and the United States reached a deal in May over Manbij after months of disagreement. Under the deal, the YPG militant group would withdraw from Manbij and Turkish and US forces would maintain security and stability around the town.

Erdogan told reporters on Tuesday during his flight back from a visit to Hungary that the implementation of the deal had been delayed.

"There is a delay but (the deal) is not completely dead. US Secretary of State Pompeo and Defense Secretary Mattis say they will take concrete steps," Erdogan was quoted as saying by Hurriyet.

The YPG is the Syrian branch of the PKK, which has waged a three-decade armed campaign against the Turkish state.

While both Turkey and the US, as well as the EU, all agree that the PKK is a terrorist organisation, the US has considered its Syrian affiliate as an ally in the fight against Daesh in Syria. Turkey however insists the YPG is a terror group and fears advances by the YPG in Syria will embolden the PKK at home.

Nonetheless, Turkey and the US - both NATO allies - have been carrying out coordinated but independent patrols in the region as part of the deal.

On Tuesday, Turkish Defence Minister Hulusi Akar was quoted by state-run Anadolu news agency as saying that joint training of US and Turkish soldiers for patrols in Manbij had begun.

Relations between Turkey and the United States were further strained over the past few months by the trial of US evangelical pastor Andrew Brunson in Turkey on terrorism charges, which he denies.

Asked about Brunson's trial, Erdogan said he was not in a position to interfere with the judiciary.

The next session in Brunson's trial will be held on Friday. The trial sparked a row between Ankara and Washington that helped send the lira down around 40 percent against the dollar this year. 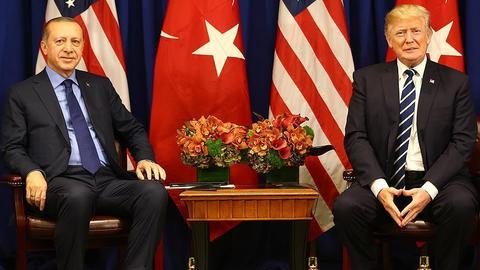