The Turkish and American officials ended three days of talks in Ankara to discuss plans for a peace corridor, saying they had agreed to set up an operations centre in Turkey "as soon as possible."

Turkish President Recep Tayyip Erdogan has hailed a decision by Turkish and US officials to set up a joint operations centre as a first step toward the creation of a peace corridor in northeast Syria.

The Turkish and American officials ended three days of talks in Ankara to discuss plans for a safe zone on Wednesday, saying they had agreed to set up an operations centre in Turkey "as soon as possible." They gave no details but said Turkey's security concerns regarding the region would be addressed.

Speaking at a joint news conference with his Ukrainian counterpart, Erdogan told reporters: "it was important that a step be taken east of the Euphrates (river) and this is being taken together with the Americans."

He added: "The important thing is to take a step east of the Euphrates and we are doing so with the Americans."

After meeting his Ukrainian counterpart in Ankara, Erdogan told a joint press conference: “Continuation of our kinsmen's existence in their historical motherland Crimea, protection of their identity and culture, preservation of their basic rights and freedoms are Turkey's priorities.”

He stressed that Crimea belonged to Ukraine and said his country and Russia would find a common path to re-establish peace and stability in the region.

Zelensky invited Turkish businesses to his country and guaranteed a comfortable work environment.

The Ukrainian leader is in Turkey for a two-day-visit.

The elections did not take place in Crimea, a peninsula on the northern Black Sea coast illegally annexed by Russia in 2014, or in eastern Ukraine, which is currently under the control of pro-Russian rebels. 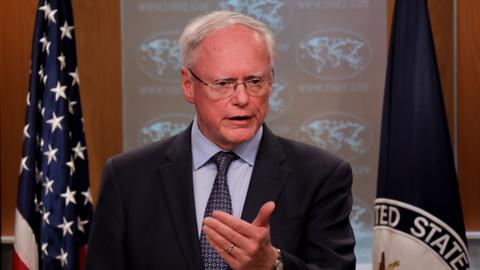