Turkey's President Recep Tayyip Erdogan says Israel would be "deceiving itself" if it thinks it can destroy occupied city's "spiritual identity" by shifting embassies and consulates there.

Turkey's President Recep Tayyip Erdogan on Friday accused Israel of trying to deliberately wipe out traces of Islamic heritage in occupied Jerusalem over the last 50 years.

"You Israel,  are deceiving yourself if you think you can destroy Jerusalem's spiritual identity by moving a few embassies and consulates there," Erdogan said, during an inter-parliamentary platform on Jerusalem at the Istanbul airport.

Tension has been running high in the occupied Palestinian territories since last year when US President Donald Trump unilaterally recognised Jerusalem as the capital of Israel.

Jerusalem remains at the heart of the Israel-Palestine conflict, with Palestinians hoping that East Jerusalem, now occupied by Israel, might eventually serve as the capital of a future Palestinian state.

Erdogan said criticising the misconducts of Israel never means anti-Semitism, adding that some European countries side with the US and do not raise their voices against Israel's illegal occupation policies due to shameful scenes from World War II.

Bombing children playing football along the coast of Gaza is a crime against humanity as bad as the Holocaust, Erdogan said.

The Turkish president said Jerusalem is not merely a cause of a handful of Muslims in Palestine, but the common cause of every Muslim around the world.

Erdogan also thanked the heroes who are upholding the honour of Jerusalem and humanity and protecting the dignity of the Muslims against Israeli occupiers.

"Palestinians must put an end to discord among themselves in order to see the outcome of their friends' efforts," Erdogan added. 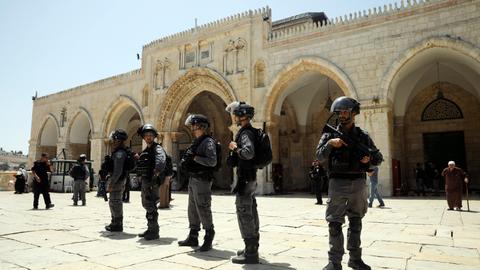