The annual exercise is aimed at improving mutual training, cooperation, and interoperability between the Turkish Cypriot Peace Force Command and the Turkish Republic of Northern Cyprus Security Forces Command, according to the ministry statement.

Turkish Vice President Fuat Oktay announced on Twitter that the five-day exercise, Mediterranean Storm, is a demonstration of their will to stand against those trying to confine Turkey to the Gulf of Antalya while ignoring the Turkish Cypriots.

"The security priorities of our country and the TRNC are indispensable, along with diplomatic solutions in the eastern Mediterranean," he said on Sunday.

Oktay wished success to the nations’ soldiers, the guarantors of peace in the Mediterranean Sea.

The drill in the TRNC, Martyr Captain Cengiz Topel Mediterranean Storm Exercise, was named after a Turkish Air Force pilot killed during Turkey’s peace operation after the inter-communal conflict on the island in 1964.

The ministry said in a statement on Saturday that the annual exercise is aimed at improving mutual training, cooperation, and interoperability between the Turkish Cypriot Peace Force Command and the Turkish Republic of Northern Cyprus Security Forces Command.

The exercise will be held with air, naval, and land elements from Turkey, the statement added.

Turkish President Recep Tayyip Erdogan has said the only solution to the dispute lies through dialogue and negotiation to reach a win-win deal for sharing, and has urged Athens to respect Turkey's rights.

Speaking at the opening ceremony of Goztepe City Hospital in Istanbul a day earlier, the Turkish president said that the alliance established against Ankara knows what Turkey is capable of.

"They will understand that Turkey has political, economic, military might needed to cast off immoral maps and documents imposed by others," Erdogan added.

🇫🇷🇹🇷The #French show of power in E. Med (sending nuclear-powered charles de gaulle) only strengthens the rhetoric of Turks who want their country to develop serious deterrent capabilities including the possibility of having nuclear power in the future.#Turkey #France pic.twitter.com/0rkLDLQ9oA

Attempt to box Turkey into its shoreline

Tensions have been running high for weeks in the region, as Greece has disputed Turkey's energy exploration in the eastern Mediterranean.

Turkey – the country with the longest coastline on the Mediterranean – has sent out drill ships to explore for energy on its continental shelf, asserting the rights of Turkey and the TRNC in the region.

It has consistently opposed Greece's efforts to declare an exclusive economic zone based on small islands near Turkish shores, trying to hem in Turkish maritime territory to only the Gulf of Antalya.

Following the forcible 1963 division of the island of Cyprus by the Greek Cypriots, the Turkish Cypriots suffered under a campaign of ethnic violence.

Cyprus has been divided into a Turkish Cypriot government in the north and Greek Cypriot administration in the south since a 1974 military coup aimed at its annexation by Greece, and Turkey's subsequent military intervention to end years of persecution and violence against Turkish Cypriots by ultra-nationalist Greek Cypriots.

For decades, there were talks to resolve the dispute, all of which ended with failure. The latest, held with the participation of the guarantor countries – Turkey, Greece, and the UK – ended in 2017 in Switzerland.

READ MORE: Why are Turkish troops in Cyprus? 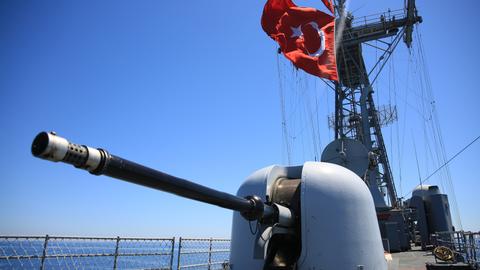