Russia's President Vladimir Putin says Turkey was a member of the Minsk Group on the Nagorno-Karabakh settlement from the very beginning but was never granted a co-chair status.

Baku is reclaiming its own territories and is within its rights to choose any advisers, including Turkey, Putin said in an interview with Russia 24 news channel on Tuesday.

“Turkey’s actions in the Karabakh issue may be qualified in whatever way, but it [Turkey] can’t be accused of violating any international law,” he said.

He pointed out that Turkey was a member of the Minsk Group on the Nagorno-Karabakh settlement from the very beginning but was never granted a co-chair status.

Putin admitted that Russia and Turkey often have different positions but have been able to reach compromises through diplomatic means.

Many countries, including ones in Europe, fought many times in the past, such as France and Germany, but it does not prevent them from cooperation today, and the same holds true for Russia and Turkey, he said.

What is currently of primary importance, Vladimir Putin noted, is that the deal put an end to the bloodshed, while the return of refugees into the conflict zone is entrusted to Russian peacekeepers. "This is the most important thing right now", the Russian president asserted.

Russian peacekeeping contingent was deployed this week to Nagorno-Karabakh where they set up checkpoints and positions in the region's administrative centre, Khankendi.

Moscow's peacekeeping mission, which the military said included soldiers that previously were stationed in Syria, comprises some 2,000 troops for a renewable five-year mission.

The ex-Soviet rivals agreed to end hostilities last week after efforts by Russia and Turkey to get a ceasefire fell through during the nearly two months of clashes.

A key part of the deal includes Armenia's return of Kalbajar, as well as the Aghdam district by November 20 and the Lachin district by December 1, which have been held by Armenians since a devastating war in the 1990s.

Putin said even Armenia did not recognise the independence of the self-proclaimed republic in the region, adding that Azerbaijan was trying to take back its lands.

Putin praised the US and France for their role in the Nagorno-Karabakh settlement, saying the Minsk group co-chairs have no reason to be offended over not being involved in the final agreements.

He said they could not be included because the fall of Karabakh was a matter of hours and demanded urgent steps, leaving no time for additional consultations in the framework of the Minsk group.

Commenting on the recent unrest in Yerevan and a possible power shift, Putin said the present situation calls for Armenia to consolidate itself and not fall apart.

On Nov. 10, Moscow, Baku and Yerevan signed an agreement to end fighting and work towards a comprehensive solution.

The Turkish leadership also welcomed the truce, describing it as a “great victory” for Azerbaijan.

Turkey and Russia have since signed a memorandum of understanding to set up a joint Turkish-Russian centre to monitor the Karabakh peace deal. 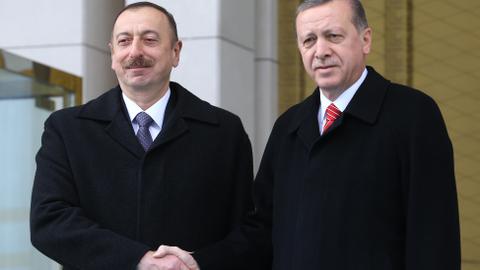