Turkish Foreign Minister Mevlut Cavusoglu says there has been "rapprochement in the positions of both sides on critical subjects" to end the conflict in Ukraine.

Türkiye's Foreign Minister Mevlut Cavusoglu has said that Russia and Ukraine are nearing agreement on "critical" issues and he is hopeful for a ceasefire if the two sides do not backtrack from progress achieved so far.

Cavusoglu said in an interview published on Sunday that there had been "rapprochement in the positions of both sides on important subjects, critical subjects".

"We can say we are hopeful for a ceasefire if the sides do not take a step back from the current positions," he said, without elaborating on the issues.

He cited Russia's demand for Ukraine to renounce ambitions to join NATO, demilitarisation, what Russia has referred to as "de-nazification", and the protection of the Russian language in Ukraine.

Ukraine and the West have dismissed Russian references to "neo-Nazis" in Ukraine's democratically elected leadership as baseless propaganda, and Kalin said such references were offensive to Kiev.

Russian forces attacked Ukraine on February 24. President Vladimir Putin has called Russia's actions a "special operation" meant to demilitarise Ukraine and purge it of what he sees as dangerous nationalists.

But, it was the first time that Moscow and Kiev met at the ministerial level since Russia attacked its neighbour. Cavusoglu also travelled to Russia and Ukraine last week for talks with Lavrov and Kuleba.

Kiev and Moscow reported some progress in talks last week toward a political formula that would guarantee Ukraine's security, while keeping it outside NATO, though each sides accused the other of dragging matters out.

Kalin said a permanent ceasefire could come only through a meeting between Putin and Ukrainian President Volodymyr Zelenskyy. But he said Putin felt that positions on the "strategic issues" of Crimea and Donbass were not close enough for a meeting.

Russia annexed the Crimean peninsula from Ukraine in 2014 while part of the eastern industrial Donbass region was seized by Russian-backed separatist forces that year.

NATO member Türkiye shares a maritime border with Ukraine and Russia in the Black Sea, has good relations with both and has offered to mediate between them. 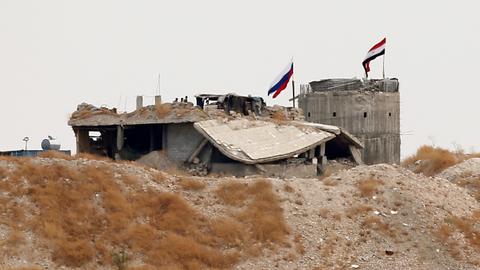 Agreements on northern Syria not fulfilled by US, Russia - Cavusoglu