The annual international forum hosted by Turkey’s public broadcaster, TRT World, has opened in Istanbul. This year's topic is "Envisioning Peace and Security in a Fragmented World." Turkey's President Erdogan will give an address on Thursday.

The 2018 TRT World Forum also brings together a range of politicians, academics, journalists and businesspeople from around the world. The theme of this year’s event is "Envisioning Peace and Security in a Fragmented World."

Turkish President Recep Tayyip Erdogan will make a speech titled "In Pursuit of Justice in a Fragmented World" at the closing ceremony of the forum on Thursday.

The two days conference will focus on transformations in the international system since the First World War, the European Union as a post-WWII project and the shifting security equation in the Middle East.

The leadership role of Women in a time of conflict, new media and trust formation, and international cooperation in counter-terrorism will also be a key issue at the forum.

This year’s forum brings together over six hundred distinguished guests and speakers from around the world.

- A World in or Out of Order? A Hundred Years Since WWI

- The EU and its Discontents: Is it the End of the European Project?

- Disrupting the Established Order: The Rise of the Global South

- The Leadership of Women in a World of Conflict.

“The forum is expected to produce concrete solutions to the recent humanitarian issues with the participants’ opinions and the Turkish approach,” Eren told TRT World ahead of the opening.

President Erdogan's closing keynote address is entitled "In Pursuit of Justice in a Fragmented World."

Global leaders in the fields of politics, academia, arts and entertainment, humanitarian aid and business will attend the awards ceremony. Turkey’s First Lady Emine Erdogan will speak at the ceremony.

Four awards will be given: Education, Communication, Lifetime Achievement and a special Citizen of the Year honour.

This year's event follows the inaugural TRT World Forum, held in 2017 in Istanbul with the theme “Inspiring Change in an Age of Uncertainty." 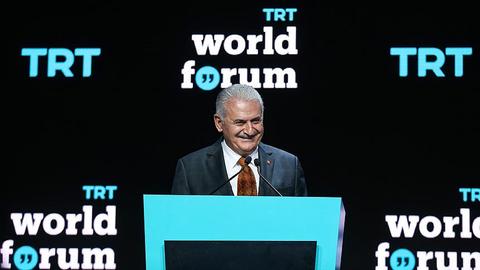 Turkey urges global cooperation in fight against terror and disorder