Turkey will be aided the recently formed Syrian National Army, which is made up of various rebel and opposition groups, for its operation into northern Syria to clear the YPG from the country's border.

Turkey is ready for a possible military operation east of the Euphrates River in Syria to establish a safe zone, the country’s Defence Ministry said Tuesday.

“The establishment of a Safe Zone/Peace Corridor is essential for Syrians to have a safe life by contributing to the stability and peace of our region,” the ministry said on Twitter.

“Turkish Security Forces will never tolerate the creation of a terror corridor at our borders. All preparations for the operation have been completed,” it added.

Turkey is determined to clear out terrorists east of the Euphrates River, protect its own survival and establish a safe zone to ensure security, peace and stability in Syria, the Turkish Foreign Ministry said Monday.

“In this way, a serious threat to the territorial integrity and unity of Syria will be eliminated and a strong ground will be established in order to prevent the recurrence of the terrorist Daesh and similar problems in the future,” spokesman Hami Aksoy said in a statement.

The Al Hamza brigade, a division of the newly formed Syrian National Army, has been training intensely for the past six months and will join the Turkish army in its operation into northern Syria in an offensive against terrorist groups in the region.

Not "siding with anybody"

The ministerial announcements come after the White House announced late Sunday that the US would pull back its forces in Syria ahead of the "long-planned" Turkish operation.

US President Donald Trump said Monday he was not "siding with anybody" on Syria after his decision to pull back troops.

"I am not siding with anybody. We've been in Syria for many years. Syria was supposed to be a short-term hit. We were supposed to be in and out," Trump said during a press conference at the White House, adding he has "a good relationship" with his Turkish counterpart Recep Tayyip Erdogan.

In his remarks, the US president said there were just 50 troops in the area where Ankara was planning to carry out the operation and did not want them to get hurt.

"I think there is a lot of pressure on Turkey. They have been fighting with the PKK for many years," said Trump.

A senior administration official speaking to reporters denied suggestions that Trump acted on the request of anyone, emphasizing the president's priority has been the protection of US forces.

"There's no green light. We're protecting our troops, and the president's made it very clear, that there should be no untoward actions with respect to the Kurds or anyone else," he said.
Turkey has long called for the US to partner with it in the fight against Daesh, a terrorist group Ankara has worked to root out, arresting and deporting its members within Turkey.

Since 2016, Turkey’s Euphrates Shield and Olive Branch operations in northwestern Syria have liberated the region from YPG/PKK and Daesh terrorists, making it possible for nearly 400,000 Syrians who fled the violence to return home to western Syria.

US dispatching aid to PKK

Footage recorded by Anadolu Agency on Monday showed the US deploying fresh military and logistics equipment to YPG/PKK terrorists east of the Euphrates River in Syria.

The delivery made through the Semelka border gate at the Iraq-Syria border is the latest example of continued US support to YPG/PKK militants.

In the last week alone, the number of trucks that the US dispatched to northern Syria has reached 600.

The US currently has around 2,000 personnel in 18 bases and military locations in Syria. 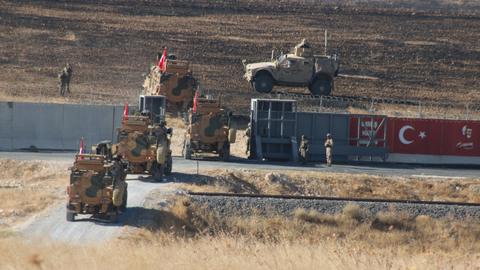