Turkey and Senegal to continue cooperation against FETO

During a visit to Senegal as part of a four-country tour of Africa, Turkish president Recep Tayyip Erdogan says it's important to shut down FETO-linked schools in Africa.

Turkey will continue its cooperation with Senegal in the fight against Fetullah Terrorist Organisation (FETO), President Recep Tayyip Erdogan said Thursday while addressing a joint news conference in Dakar with his Senegalese counterpart Macky Sall.

The Turkish president arrived in Senegal as part of a four-country tour of Africa which started on February 26 with a visit to Algeria, followed by Mauritania. His last stop will be Mali.

"Our cooperation with Senegal in combatting FETO is to continue. Shutting down of FETO-linked schools is very, very important," Erdogan said.

"We will raise a generation which is fond of its motherland, which works for the country and their family -- through schools being established in Senegal via our Maarif Foundation," he added.

Turkey established the Maarif Foundation in 2016 to take over the administration of overseas schools linked to FETO. It also establishes schools and education centres abroad.

FETO and its US-based leader Fetullah Gulen orchestrated the defeated coup of July 15, 2016, which left 250 people dead and nearly 2,200 injured.

Evaluated #Turkey-#Senegal bilateral relations & cooperation at international organizations, in particular at the #OIC, during the meeting headed by President @RT_Erdogan and President @Macky_Sall pic.twitter.com/ditOLqLaqx

"Senegal is a valuable friend and strategic partner for us. Senegal has once again proven on July 15 that it is Turkey's foul-weather friend," he said.

Erdogan said that 29 projects worth $775 million were launched by Turkish companies in Senegal, some of which are still underway.

The projects include a market hall, a furniture factory and a rail system, he said.

The Senegalese president said they were willing to continue efforts in further enhancing relations with Turkey.

"Senegal,..., is to continue working with Turkey in international matters and counter-terrorism cooperation," Sall said.

He urged Turkey to invest in the country.

"I am calling on Turkish businesspeople to share their experiences and increase their cooperation," Sall said.

"So far, 28 different agreements have been signed between the two countries. We need more cooperation with Turkey for self-sufficiency in Senegal's agricultural area.

"Turks can invest in the field of mining, construction, tourism, health and energy in cooperation with Senegalese businesspeople," he said.

Sall added that the country needs more hotels in Senegal to improve the tourism potential of the country and health investments to reduce the number of patients going to hospitals abroad.

The Senegalese president said they stand on the same side as Turkey on the Palestinian issue.

The leaders vowed to enhance cooperation in the fields of economy, trade, energy, tourism and transportation. 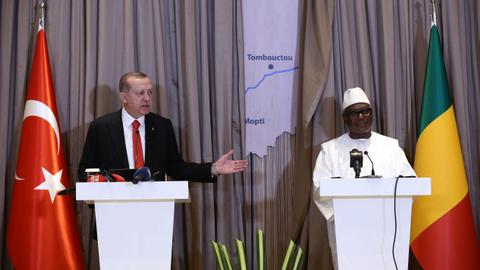