A preferential trade deal between Baku and Ankara will go into effect as of March 1, the Turkish trade minister has announced.

Turkey and Azerbaijan have set a target of reaching a trade volume of $15 billion by 2023, the Turkish vice president has said.

Speaking at the Turkey-Azerbaijan Business Forum, Fuat Oktay said on Thursday that apart from the brotherhood between Turkey and Azerbaijan, the two countries are important political and trade partners.

"Our goal is to find new alternatives for our businesspeople in the face of slowing global economic growth due to the pandemic. Moreover, our target is to overcome weak and fragile growth trends with projects to be carried out with you, our precious brothers," Oktay said.

“In this direction, a crucial duty falls upon the businesspeople of our countries to put the current potential into practice,” he added.

Pointing out Turkey's economic performance in 2020, the vice president stressed that Turkey and China are the only countries at G20 that may end the year with growth.

Meanwhile, Trade Minister Ruhsar Pekcan stressed the preferential trade deal with Azerbaijan will enter into force as of March 1.

"This is just the beginning. We want it [preferential trade deal] to evolve into a free trade agreement, a target of both sides," Pekcan added.

“Accordingly, in order to achieve the $15B trade target, the two countries' business world must actively work with us,” she added.

Pekcan stated that with the victory of Azerbaijan in Nagorno Karabakh, a new window of opportunity has opened in Nakhchivan, an autonomous region.

"This corridor is very important for us. Our aim is to make Baku a logistics center – both for the Baku-Tbilisi-Kars railway and on this route. Whatever it takes to make it a preferred route after Turkmenistan's borders open."

Azerbaijan's victory was the beginning of a brand new era in which the commercial and logistics structure of our region will change, she stressed.

Turkish contracting and consultancy companies are ready to cooperate and share their experiences with Azerbaijani business people for the reconstruction of Upper Karabakh, she said.

"It is not only the duty of Azerbaijan, but for all of us to raise the living standards of the people of the region."

In Azerbaijan, Turkish construction companies are so far involved in 436 projects worth $15 billion, she noted.

Within the scope of Turkey-Azerbaijan Business Forum, a total of 11 agreements and a memorandum of understanding – worth over $100 million – were signed between the two countries. 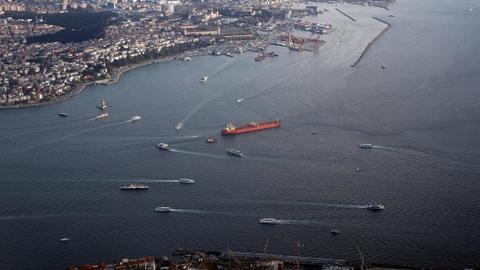