Presidential spokesman Ibrahim Kalin says it is Turkey's "natural right" to ask the United States to halt any such moves by the terror groups in Syria.

Speaking to reporters at the presidential complex in the Turkish capital, Ankara, Kalin said: "In this regard, Turkey took the necessary steps via official channels, and we will continue to take such steps."

"It is particularly expected by Turkey that the US must certainly step in and halt the shifting of YPG forces, which move under its control, in Manbij to Afrin. This is our natural right."

The US and the YPG terror group, which have been receiving American weapons and support, are stationed in Manbij; US forces there have resisted Turkey's calls for them to leave.

Turkey has also pledged to launch a military operation against the YPG/PKK in the strategically important city of Manbij that lies to the west of the Euphrates River in northern Syria, as part of the ongoing operation.

Manbij lies northeast of Aleppo and just south of the Turkish border.

Washington has voiced concerns about the safety of US troops in Manbij amid Turkey's operation in northeastern Syria. There are about 2,000 American soldiers in Manbij.

But Washington has been sending heavy weapons and ammunition to the group and Turkey says this has been under the pretext of fighting against Daesh, which, as expected, has angered Ankara.

Kalin also announced that President Recep Tayyip Erdogan would talk to his Iranian counterpart Hassan Rouhani over the phone on Wednesday afternoon.

"We expect to see a significant calming in tensions in eastern Ghouta region in the next few days, as per Russian President Vladimir Putin's instructions. It will be our main topic in the phone call," he said.

A trilateral summit of leaders from Turkey, Russia, and Iran is expected to be held on April 4 in Istanbul.

The main topic on the agenda of the leaders' summit is expected to be Syria.

Kalin also said Turkey had been "using every means possible" in order to achieve results in eastern Ghouta, including humanitarian aid and diplomatic efforts led by Erdogan.

On Tuesday, Erdogan and Putin spoke over the phone about the ongoing human tragedy in the besieged Damascus suburb and other developments in Syria.

On the arrest and quick release of Salih Muslum, former co-leader of PYD group – the political arm of the YPG group in Syria – in the Czech capital, Prague, Kalin criticised Europe for letting him walk free.

"What does it mean when Europeans allow a person whom Turkey recognises as a terror group member to walk freely in European capitals and streets? They should ask themselves that."

Muslum, an influential figure in the PKK-related PYD group, is being sought by a Turkish court on suspicion of his involvement in the planning of a deadly terrorist attack carried out in Ankara in 2016.

He was last spotted in Berlin on Saturday, where he also participated in a demonstration organised by supporters of the PKK.

The presidential aide also "vehemently condemned" the burning of a Turkish flag during a rally against Turkey that had been organised by a racist political party in Athens on Monday.

"We have also taken initiatives in this regard. I want to express our expectation from the Greek authorities to immediately find the offender and take them to court," Kalin said. 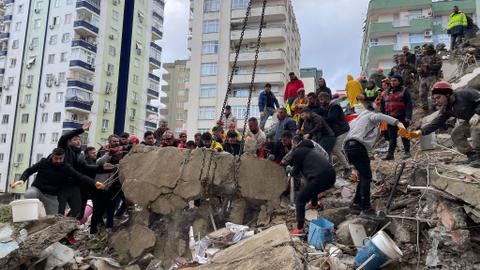