The agreement covers a joint Turkish-Russian monitoring centre that will oversee the ceasefire in Nagorno-Karabakh, says Turkish President Erdogan.

Turkey and Russia have signed an agreement establishing a joint centre to monitor the ceasefire in Nagorno-Karabakh and the two countries will work together there.

Turkish President Recep Tayyip Erdogan made the announcement on Wednesday in a speech to deputies from his governing Justice and Development (AK) Party in Parliament.

Earlier, the Russian military announced that some of its peacekeeping troops deployed to Nagorno-Karabakh had reached the region. The troops are there under a deal undersigned by Russia that halted six weeks of fighting between Azerbaijan and Armenia.

Erdogan said his country is ready to do whatever is needed for the region's peace, security, and confidence, adding that Karabakh's quick peace process can be replicated in Syria as well.

"A road will be constructed to connect Azerbaijan and Nakhchivan Autonomous Region," Erdogan said.

The Turkish president also congratulated Azerbaijani President Ilham Aliyev and the Azerbaijani people over the liberation of territories from Armenia's occupation.

Relations between the ex-Soviet republics have been tense since 1991 when the Armenian military occupied the region, a territory recognised as part of Azerbaijan.

Fresh clashes erupted on September 27, and continued for 44 days. Both sides accused the other of violating several ceasefires. Azerbaijan accused Armenian forces of attacking residential areas and killing civilians.

Baku retook several cities and nearly 300 settlements and villages from Armenian occupation during this time.

On November 10, the two countries signed a Russia-brokered agreement to end fighting and work towards a comprehensive solution.

Turkey has welcomed the truce, which is a result of Baku's military successes and has given it an upper hand over Yerevan to resolve the three-decade-long dispute. 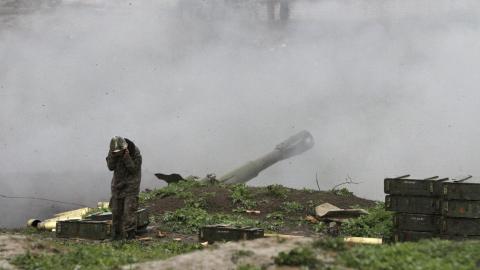