During a visit to Mali as part of a four-nation African tour, Turkey's President Recep Tayyip Erdogan criticises the "callous" attitude of Western countries towards terrorism.

The primary targets of Daesh, al Qaeda and Boko Haram have always been Muslim, Turkish President Recep Tayyip Erdogan said on Friday during a joint news conference with his Malian counterpart Ibrahim Boubacar Keita in the capital Bamako.

The Turkish president on February 26 started a four-nation Africa tour with a visit to Algeria followed by Mauritania, Senegal and Mali.

Erdogan criticised the "callous" attitude of Western countries towards terrorism and urged them to be "much more sensitive" in this regard.

"Whoever identifies terrorist groups with a particular religion or ethnic identity plays into the hands of those terrorists," he said.

Turkey's interests in Africa have increased since the governing Justice and Development party took power in 2002.

In a decade, its trade with the continent has been tripled to nearly $19 billion.

During his official visit to Mali, Erdogan discussed several bilateral issues with President Keita, including energy, infrastructural development and military and defence relations.

Relations between #Turkey and #Mali continue to flourish. We signed eight bilateral agreements during state visit headed by our President @RT_Erdogan pic.twitter.com/7HxsQriTqC

Turkey provided materials to Malian defence and security forces in 2017 in accordance with the peace commitments made under the framework of the Turkey-Mali Action Plan, Erdogan said.

He also said that a Turkish company would contribute toward increasing the country’s energy capacity. 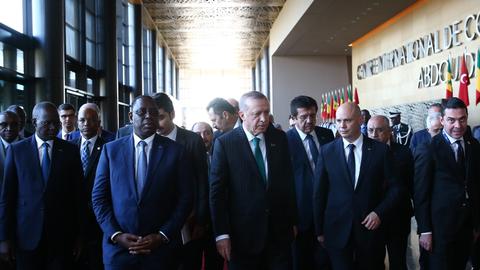 Turkey and Senegal to continue cooperation against FETO