Turkey’s President Recep Tayyip Erdogan has announced a decision to hold snap elections in June 24 this year after he met the leader of the country’s opposition Nationalist Movement Party (MHP), Devlet Bahceli, at the presidential complex on Wednesday. The president’s decision comes a day after Bahceli called for early presidential and parliamentary elections.

"As result of consultations with Mr. Bahceli, we decided to hold elections on June 24, 2018, a Sunday," Erdogan said in an address at his presidential palace after meeting Bahceli.

The eagerly-awaited meeting between Erdogan and Bahceli started at 1030 GMT lasted only half an hour, the presidency said, without giving further detail.

"Even though the president and government are working in unison, the diseases of the old system confront us at every step we take," Erdogan said, referring to the current parliamentary system in place in Turkey, which will be made redundant after the next presidential election when the government will switch to an executive presidential system.

The new system of governing was approved in an April 2017 referendum on constitutional change.

"Developments in Syria and elsewhere have made it urgent to switch to the new executive system in order to take steps for our country's future in a stronger way," Erdogan added.

TRT World's Caitlin McGee is in Ankara for the updates on President Erdogan's announcement of snap elections.

The polls in June will give Erdogan a chance to extend his stay in power with a new five year mandate, after already serving 15 years in power as premier and then president.

Erdogan has established a formal alliance with the MHP to fight the elections, making it hard for his party to dismiss Bahceli's call out of hand.

MHP leader since 1997, Bahceli is seen as a kingmaker in Turkish politics.

He precipitated the 2002 snap polls that brought AK Party to power. The AK Party has ruled Turkey ever since.

Selman Ogut, an Associate Law Professor at Medipol University, weighs in on President Erdogan's decision to call a snap election. 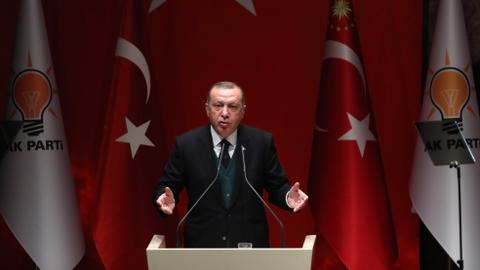 Why has Turkey decided to hold early elections?