Turkey shocked over suspected murder of academician in Istanbul

Police have arrested a suspect in the alleged murder of Aylin Sozer, who was found dead in the city's Maltepe district, with top ministers and the First Lady seeking swift justice in the case that has outraged the country.

Senior Turkish officials including the First Lady have reacted with anger over the suspected murder of academician Aylin Sozer in Istanbul's Maltepe district.

Officials said the firefighters and police crew safely evicted other residents of the building and detained Kemal A, age 32, who was in Sozer's apartment at the time.

The motive of the suspected femicide is being ascertained.

"We expect the criminals who murdered our women to receive severe punishment."

"I have no doubt that this heartless murderer will get what he deserves from Turkish justice."

"We will be following closely the trial process in order for the murderer to receive the heaviest punishment," she said.

Turkey's Justice Minister Abdulhamid Gul said the court will do what is necessary to deliver justice.

According to police sources, the perpetrator attempted to burn Sozer's body after slitting her throat.

The body has been moved to Istanbul University's Institute of Forensic Sciences for further examination.

Istanbul Aydin University said in a statement that Sozer was working there since 2013 and the institution is in deep sorrow. 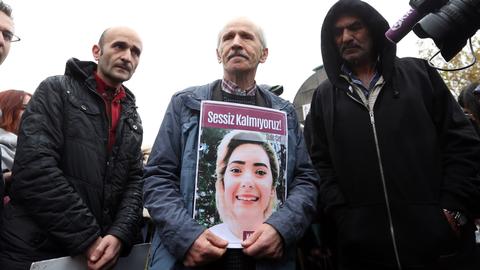 Two men get decades in prison for killing student in Turkey